Many daily activities that we perform are result of inbuilt oscillatory circuits in our body. For example walking, breathing, heart beat, blinking, etc. The coding and decoding of stored memory also happen via controlled oscillations. The link http://en.wikipedia.org/wiki/Neural_oscillation contains information about neural oscillations. It says in here that a single neuron, an ensemble of neurons and activity of brain may exhibit synchronised oscillations. It is also said that these oscillatory circuits can control all the parameters of oscillations i.e. frequency, phase and amplitude.While above are true for neurons as a part of bigger systems, my question is related to study of isolated neurons.

There are many instances of studies of artificial neural circuitary created on a customized substrate(Micro Electrode Array) by masking techniques. Also there are loads of ongoing research to study the simple neural circuits in temporal and spatial domain by electrical interfacing of semiconductor and nerve cells using Field Effect Transistor(FET).

I want to know if these kind of oscillations are unique to some special kinds of neuron? Is the control of oscillation parameter possible in every neurons and isolated neurons? Can a neuron or any other cell exhibit change in action potential independently? Do other cells except neuron and pacemaker cells exhibit oscillation? Can a single neuron exhibit memory?
Can a simple circuit like below generate oscillations?
Suppose I culture the neurons on a substrate in a controlled way such that one neuron is connected to only one other neuron in a linear fashion and the last neuron is connected to first. Assuming we supply the ions if there is loss, can a clock pulse of varying frequencies be generated, where the frequency is the function of the no. of intermediate neurons and their length.

It would be a great help if somebody can provide information about softwares to simulate simple neural circuits (If available).

Background
Given our exchange in the comments, I will focus on single neurons with intrinsic oscillatory behavior. For example, thalamocortical relay neurons and inferior olive neurons have intrinsic oscillatory properties, mainly through the interaction of a hyperpolarization-activated cation current (Ih) and a low-threshold activated Ca2+ current (IT) (McCormick & Huguenard, 1992, and Fig. 1). 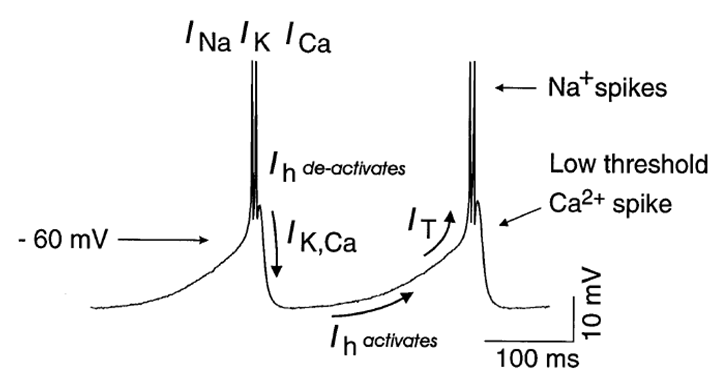 Rhythmic burst firing is created through generation of a low-threshold Ca2+ current (IT), which activates fast action potentials mediated by Na+, K+, and Ca2+ currents (INa, IK, and ICa, respectively). Entry of Ca2+ in the cell during fast action-potential firing and low-threshold Ca2+ spiking result in after-hyperpolarization through activation of a Ca2+-activated K+ current. This afterhyperpolarization activates Ih. Combined activation of Ih and decrease of a Ca2+ activated K+ current (IK,Ca) results in depolarization of neuron, which activates another low-threshold Ca2+ spike. In this manner, Ih modulates frequency of oscillation. In addition, tonic activation of Ih also contributes to average membrane potential, and therefore to presence, strength, and frequency of oscillation in these neurons.

Regarding the series of sub-questions - these are quite varied. Perhaps it is better to generate another one or two focused, well-formulated questions on this. For now, I will answer them curtly below. Further, the papers I linked contain a wealth of information, and the McCormick & Huguenard (1992) paper is a detailed modeling study. Both papers are awesome and the authors are three of my all-time favorites so far.

I want to know if these kind of oscillations are unique to some special kinds of neuron?
Answer: Yes quite unique, because Ih channels are quite unique (they have been called "funny currents") and they are not present in every cell.

Is the control of oscillation parameter possible in every neurons and isolated neurons?
Answer: No, as the molecular machinery such as Ih channels may be lacking in most other cells.

Can a neuron or any other cell exhibit change in action potential independently?
Answer: That depends whether the cells are coupled through synapses or other means.

Do other cells except neuron and pacemaker cells exhibit oscillation?
Answer: Yes, some cells start to oscillate, for example in the degenerated retina (modeling work only) and there are non-neural cells that when cultured spontaneously start to oscillate.

Can a single neuron exhibit memory?
Answer: Yes, through long-term potentiation or depression.

Not the answer you're looking for? Browse other questions tagged neuroscience neurotransmitter memory action-potential microarray or ask your own question.

34
How and where, in the human brain, are memories stored?
1
Are there "multi-frequency" signals within a human brain?
6
Hebbian theory "fire together" clarification
5
Neurons with thousands of connections: where are the extra connections coming from?
1
Do individual neurons communicate with the origin of thoughts?
10
How are neurons / synapses "biased"?
5
How are hereditary neural circuits created in the brain during early development?
1
Seizures and blood pressure
0
Functional unit