GTP gamma S is routinely used in studies of G proteins to stably activate the G protein. Comparing the structures of GTP gamma S and GTP, the Sulphur atom replaces the Oxygen attached to the leaving Phosphate group. However, this is not the bond that is hydrolyzed (dashed line). What makes it non-hydrolyzable then?

Gamma thiophosphate-analogues of nucleotides were first synthesized in the 70s (Goody and Eckstein, J. Am. Chem. Soc., 1971) and have been used to decipher many intracellular pathways.

To understand why GTP-γ-S is not (or very slowly) hydrolysed by GTPases, we can look at the structure of a GTPase-GTP complex.

GTP binds to various sites on GTPases. This is the binding of GTP to Rap2A, as described in (Cherfils et al., EMBO J. 1997). 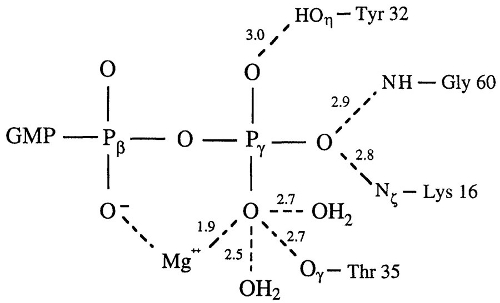 As you can see four different sites bind to the γ phosphate.

The interaction of Tyr32 with GTP suggests that its general conservation in small G proteins may have structural or functional advantages. Tyr32 is located three amino acids upstream of a threonine (Thr35 in Ras) which is extremely conserved in most G domains. The alpha subunits of heterotrimeric G proteins have a conserved arginine equivalent in sequence to Tyr32, which was shown from crystal structures to interact with the γ-phosphate of GTPγS

In particular, the position of Tyr32 is different, when Rap2A is crystallised with GTP-γ-S. This figure shows the position of the Tyr32 with GDP (A), GTP (B) and GTP-γ-S (C)

Crystals of Rap2A–GTPγS, whose structure we also report at 3Å resolution, are isomorphous to the Rap2A–GTP crystals. Both structures are essentially similar, except that Tyr32 no longer forms a hydrogen bond with the corresponding atom of the γ-thiophosphate, which is probably the sulfur atom. The Tyr32–γ-thiophosphate distance is 7.2 Å. The conformation of switch I and II and their interaction with the nucleotide are otherwise identical. Thus, the Tyr32–γ-phosphate hydrogen bond forms only in the presence of the true ligand, but is probably not essential for the triphosphate conformation of Rap2A nor for proper binding of the nucleotide. In particular, the position of Thr61 compares well between the GTP and GTPγS complexes.

The author conclude that:

Our study shows that the complex with the natural ligand GTP is similar to the complex with GTPγS, and thus justifies most conclusions obtained from previous structures of G proteins with GTP analogues. However, the structure of Rap2A with GTP reveals a novel interaction of Tyr32 with an oxygen of the γ-phosphate of GTP and with the amide group of Gly13. In the GTPγS complex, Tyr32 is shifted away from the corresponding atom. The Rap2A–GTP and Rap2A–GTPγS complexes are otherwise identical, and form isomorphous crystals. Thus, the interaction of Tyr32 with GTPγS is prevented solely by the presence of the gamma-sulfur, but the conformation of switch I and II is similar whether GTP or a GTP analogue is bound. GTPγS probably introduces a different charge distribution on the gamma-(thio)-phosphate and/or modifies the polarizability of the β–γ P–O bonds as compared with GTP

2
How does GTP help in the step of codon recognition?
6
Non-ribosomal peptide synthesis: why Glutathione cannot be produced by the ribosome?
1
Is there a difference in the energy produced from the hydrolysis of GTP and ATP?
6
Why is GTP, not ATP, produced in Gluconeogenesis & TCA Cycle?
1
Non competitive inhibitors and Uncompetitive
3
Why is GTP, rather than ATP, used in nuclear transport?
2
What is the structural difference between beta and gamma globin chains of Hb?