How did butterflies evolve to have eyes on their wings?

Some butterflies, such as the UK native Peacock butterfly (Google Image Search) have markings on their wings that look just like eyes, complete with a white fleck to imitate a convex, transparency effect, as though the "eye" is reflecting sunlight.

Presumably, this pattern is designed to deter prospective predators, because the predator will see a creature with massive eyes looking at them and think twice before attacking.

But how did the pattern evolve? Was the first one a fluke / a genetic mutation that happened to work, or is there another explanation?

For possible bonus points, is there any way of telling when this occurred, and therefore making a guess as to which creature's eye is being imitated?

There has been quite a bit of study on the development of eyespots. How did they evolve is still unclear, but several experiments have elucidated the molecular mechanisms underlying their formation.

The Wikipedia page about eyespots gives a good basic introduction and some interesting references.

So, first of all, how does an eyespot form?

If you take cells from a focus in a developing wing, and transplant them into another region of the wing, an eyespot will develop at the transplanted site.

The photo on the left is a normal wing from an adult Buckeye butterfly, Precis coenia. In the middle and right photos, some cells of the big eyespots have been transplanted in a new position during development. As you can see, a third eyespot develops. Note that the middle photo is from an autograph, that is, the cells were transplanted on the same wing. This results in a shrinkage of the normal eyespot. In the right picture, instead, cells were transplanted in another individual, and this does not result in shrinkage of the eyespot.

The authors conclude that:

It is evident from these experiments that the development of the large eyespot on the forewing of Precis coenia depends on the presence of a small group of cells that lie at or near its center. This group of cells corresponds to a "focus": a small region, occurring in each wing cell, that is postulated to be responsible for the induction of most color pattern elements in butterflies and moths (Nijhout, 1978). Cautery experiments establish an upper limit for the size of this focus in the neighborhood of 300 epidermal cells, though it is probable that the actual size of the focus is much smaller.

They further speculate that a specific morphogen may be involved:

The response of the eyespot pattern to cautery or transplantation of the focus is most readily interpreted if we assume that the focus is the source of a morphogen that is somehow able to induce synthesis of specific pigments.

The idea that a morphogen was involved has been confirmed in later years.

The focus is proposed to be a signalling source for a morphogen, the levels of which determine the pigmentation of surrounding cells. Recent investigations have indicated that regulatory genes, such as the Distalless homeobox gene, are specifically espressed in the eyespot focus.

During the development of the wing the expression of the Distalless (Dll) protein (shown in green in the picture) corresponds to the location of the future eyespots.

Several mutations exist that will provoke changes in the eyespots patterns. Some of this with the evoking names of Cyclops, Spotty and Bigeye were analysed in the paper.

Now, without going much into insects genetics (which is far from being my domain of interest), you can clearly see that, although the number, position and size of the foci are affected by the mutations, their position always correspond with an increased expression of Dll during development. 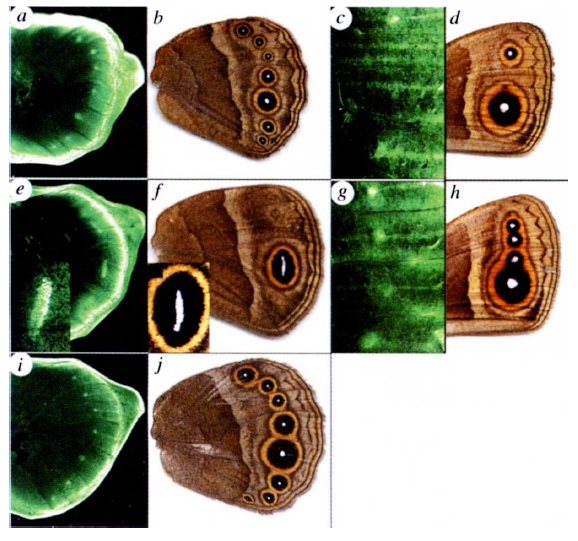 From the conclusion of the paper (bold mine):

The selection experiments on B. anynana rapidly produced dramatic differences in eyespot size which were due to genes of small phenotypic effect. The mutants described here show that genes also exist with large phenotypic effect on eyespot development (including size) that have no perceptible effect on other wing or body patterns. It is likely that the evolution of eyespot patterns in nature involves both genes with large and small effects on eyespots development. [...]
These observations suggest that the regulation of the eyespot developmental pathway is such that eyespot patterns can evolve rapidly and independently of other wing-pattern elements and body structures.

Finally, another interesting read is:

where the authors propose that:

Complex traits require co-ordinated expression of many transcription factors and signaling pathways to guide their development. Creating a developmental program de novo would involve linking many genes one-by-one, requiring each mutation to drift into fixation, or to confer some selective advantage at every intermediate step in order to spread in the population. While this lengthy process is not completely unlikely, it could be circumvented with fewer steps by recruiting a top regulator of an already existing gene network, i.e., by means of gene network co-option. Subsequent modifications of the co-opted network could further optimize its role in the new developmental context.

You're correct with the genetic mutation bit. A basic explanation would be:

Some gene or genes became mutated that lead to the coloration you see, and the end result was that the butterfly or butterflies with the mutated gene were able to produce more offspring or offspring which survived better than the eyeless versions.

There are ways of dating genetic mutations by comparing one organism's genes to another, but accuracy can be an issue without some significant genomic study to confirm mutation rates and other aspects.

However, the butterfly wouldn't be purposefully imitating another creature's eye. It may be by chance and/or predator behaviors that the eyespots look like the eyes of another creature, but the adaptation wasn't a willful act. It was a random genetic mutation or mutations that lead to beneficial coloring, and the eyespots may have improved over time as more mutations occurred.

''Some gene or genes became mutated that lead to the coloration you see, and the end result was that the butterfly or butterflies with the mutated gene were able to produce more offspring or offspring which survived better than the eyeless versions.''

But, for the genes to mutate randomly, an eye would not form, but a mess. Further, how strange it is, that neither the butteryfly nor the genes are able to see this manifestation. Yet any preditors, from above sees it clearly.

To apply that this random mutation and natural selection, makes up everything that we know, is in itself blind and calls for an eye.

I will state, it is positive variation and nothing more nothing less. No lifeform goes downhill in terms of evolution. Random anything would render any 'random' lifeform , lifeless.

5
How does a tiger have stripes?