How to compute the regression of individual fitness on individual phenotype 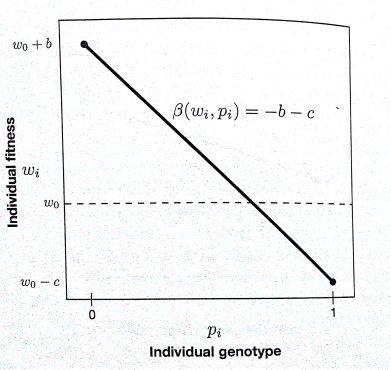 Let $V(X|Y)$ be the payoff of individual $X$ when it interacts with $Y$ (in other words, $X$ is the focal individual; $Y$ is the other individual). I understand that McElreath and Boyd calculated the regression coefficient by computing $V(C|D) - V(D|C)$ --- as opposed to $V(C|C) - V(D|C)$, where you keep the strategy of the other individual constant. My question is why this is the right way of calculating $\beta(w_i,p_i)$.

I am not sure I understood the question. Let me know if this helps.

Let's assume that the frequency of those who cooperate is 0.5. The slope of the regression line (which R.squared is equal to 1 as we have as many data point than degrees of freedom) is by definition $\frac{\Delta w}{\Delta p}$. You defined $\Delta p = 1$. What is $\Delta w$ then?

In such case the slope of the regression will necessarily be lower than $-b-c$ because some cooperators will meet other cooperators, increasing their fitness (=highering the points on the right hand side of your graph) and some defectors will meet other defectors, decreasing their fitness (=lowering the points on the left hand side of your graph)

The only stable equilibrium is when the frequency of cooperators is 0. In such case, there is no variance and we cannot even talk about regression.

where $w_0$ is the baseline fitness and $k$ is the number of altruists in the group (so, $k$ can be 0, 1, or 2). When we are calculating $\beta (w_i, p_i)$ the question we are trying to answer is "for a given group in the population, what is the regression coefficient $\beta (w_i, p_i)$?". This implies that $k$ must be constant because, otherwise, we would be considering individuals from different groups. Accordingly,

For $\beta(w_i, p_i)$ to be equal to $-c$ we would need to consider the payoff of cooperators from different groups.

Following up on the equation Remi.b suggested in a comment below, we can write the regression coefficient to a population structured in groups of $n$ individuals. More specifically,

With this definitions, we get

Not the answer you're looking for? Browse other questions tagged evolution natural-selection mathematical-models population-genetics evolutionary-game-theory or ask your own question.

12
Structure of fitness landscapes in the NK model
6
Why does the slope of parent-offspring regression equals the heritability in the narrow sense?
7
Hamilton's inclusive fitness approach
2
Modeling inclusive fitness
4
In a fitness landscape, is fitness relative or absolute?
2
Is the suicide of a moribund individual to be considered group selection?
0
Does the term “fitness advantage” or “fitness disadvantage” make sense?