It is known that some viruses embed themselves in the human genome. Is there a mechanism by which human genes can be transferred to other animals or plants by means of viruses shuttling them from humans to other organisms?

Yes, Horizontal gene transfer (HGT) can happen in both ways, from prokaryotes to eukaryotes and vice versa. So far less attension is given to from eukaryotes to prokaryotes HGT. It has played very important role in eukaryotic evolution also. Following figure from (Patrick and Palmer 2008) shows some potential cases in eukaryotic phylogeny. 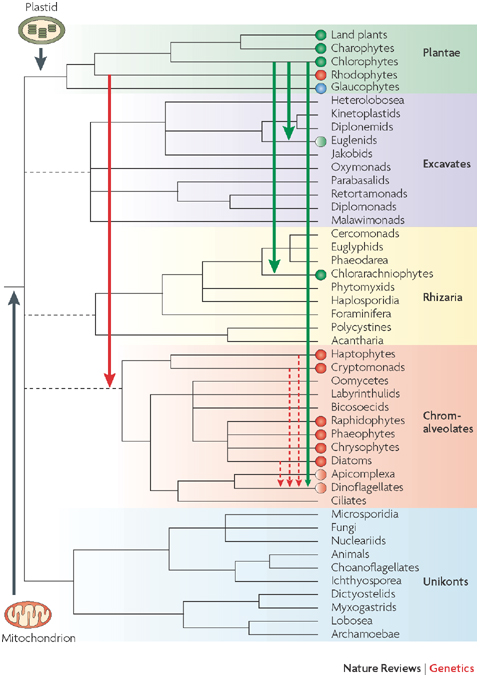 You can find many such examples from above reference. Coming to human part, there are few cases like From Humans to Plasmodium vivax and From human to Neisseria gonorrhoeae , where researchers have shown evidence of HGT from humans to prokaryotes. Unfortunately , there is very little on mechanism by which they transfer. It is matter of speculation right now as these studies are controversial.

Not the answer you're looking for? Browse other questions tagged genetics dna human-genetics horizontal-gene-transfer or ask your own question.

15
What is the contribution of viruses to the evolution of mankind?
3
Horizontal Gene Transfer
3
Virus-to-virus gene transfer via "sequences integrated into a common host organism"
4
Data on Gene Position in Human Genome
2
What does (-;-) after a gene mean?
0
What is the likelihood of a single human gene to the same gene from the other human?
1
Why do humans share over 99% of their genomes?