If the haploid prothallium of a fern fertilizes itself into a diploid sporophyte, does this make all ferns clones?

From what I understand in the alternation of generations in ferns, mature spores germinate into a haploid prothallium. But how does this gametophyte produce recombinant gametes if it itself develops mitotically from a haploid spore? And if the gametophyte produces its own (haploid?) eggs and sperm, how does it ultimately produce a diploid sporophyte with the same number of chromosomes as its parent? If the haploid prothallium fertilizes itself, that means it possesses two identical copies of its parent's chromosomes, which themselves are identical - there is no outcrossing between plants. So are all ferns genetic clones? Why even bother with meiosis if you don't have a recombinant mixing of alleles? Or do I have this totally confused?

botany reproduction sex
Share
Improve this question
edited May 21 '15 at 11:26

No, it would not be accurate to label them clones, and the organism still goes through sexual reproduction even if they are selfed. Selfed offspring would get two copies of the "same" chromosome (when selfed within the same prothallus), when the parent might have two chromosomes of different origins, and there will also be recombination during meiosis (during spore production in the sporangia), which will alter the chromosomes. And even if all selfed offspring from the same prothallus will carry that same chromosomes, different prothalli from the same parent will carry different chromosomes, which means that all offspring will not be identical. So to label selfed ferns as clones wouldn't be accurate, since the offspring wouldn't be genetically identical to their parents and offspring from different prothalli would also not be genetically identical. The situation is similar to e.g. monoecious plants that lack self-incompatibility (especially those pollinated by wind), where selfing will be common. The difference in ferns is that all gametes on the same prothallus will carry the same chromosomes.

Also note that some ferns have mechanisms to avoid self-fertilization, and that many species have a mixed mating strategy that allow both selfing and outcrossing, usually with higher fitness in outcrossed individuals.

In ferns (and seed plants) the dominant, largest stage of life is the diploid sporophyte. Within the sporophyte, meiosis occurs producing haploid spores. These spores are dispersed and grow into the small haploid gametophyte, AKA the prothallium. The gametophyte produces haploid gametes - both egg and sperm coming from the same individual, usually. The sperm fertilizes the egg forming a diploid zygote, which grows into an adult sporophyte.

This image should help. Let me know if anything is unclear 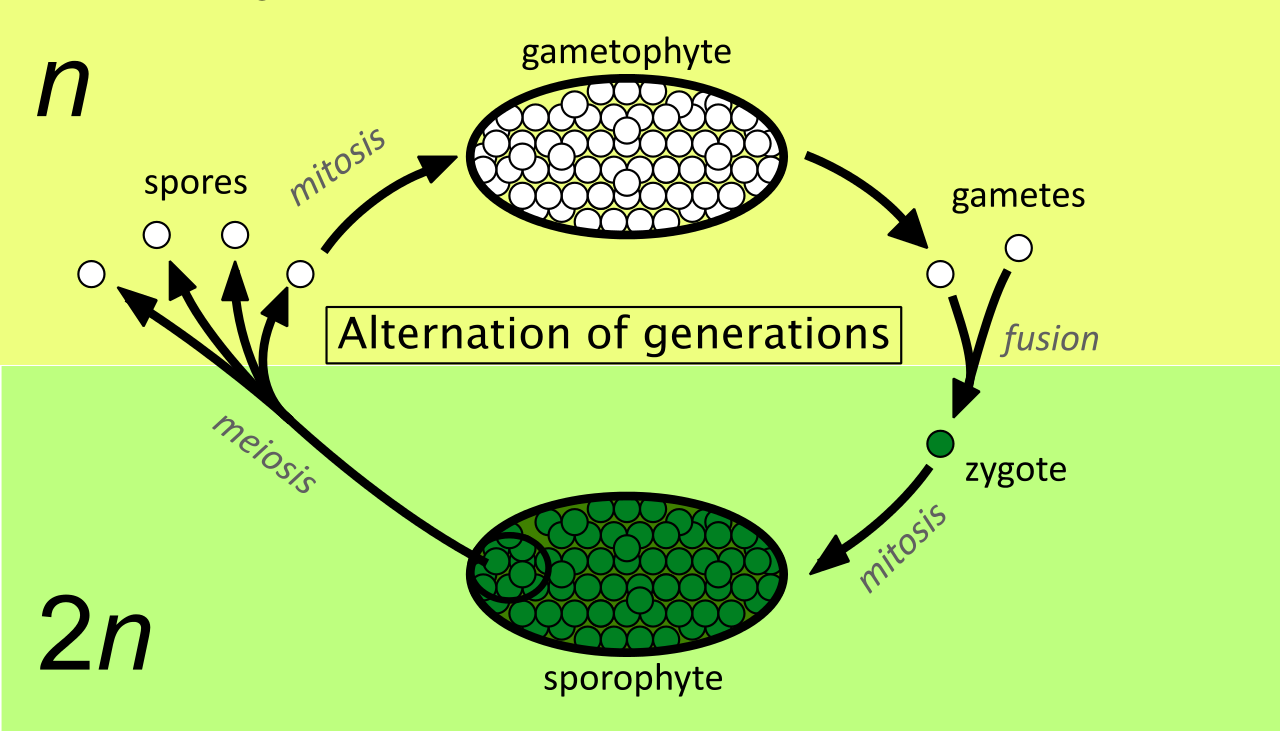 It has already been mentioned that different prothalli have a different mix of chromosomes, and that in some (yet not all) ferns a single prothallus doesn't fertilize itself, e.g. because male and female gametes aren't produced at the same time.

I want to add that one prothallium usually only produces one sporophyte.

So even in cases with self fertilisation, you only get clones if the gametophyte produces several sporophytes.

Not the answer you're looking for? Browse other questions tagged botany reproduction sex or ask your own question.

0
Does the sun light have to have *direct access* to fruits to make them sweet?
8
Why do OX5034 GM mosquitos require the presence of tetracycline to survive? What does the drug do in this case?