What is the trigger of pollen tube formation when the pollen is on the stigma?

What is the mechanism of pollen tube formation when the pollen is close to the stigma ?

Is it because of chemotaxis? In other words, is the growth triggered by some chemical substance that is released by the stigma?

We have learnt that on a stigma of a flower, you can sometimes find pollen of other plant species. Would these pollen grains also form tubes in response to a possible signal from the stigma of a different species? 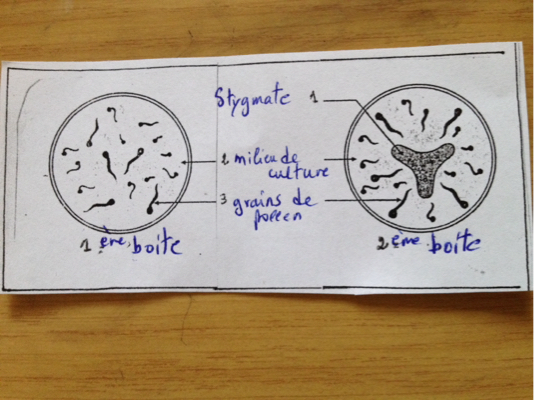 So in this experiment we put pollen grains in 2 bottles which contained all chemical substance required for the formation of pollen tube.

In bottle 2 we observe that all pollen tubes are oriented to the stigma! If it really is some kind of chemotaxis then what is the chemical substance that causes this?

Pollen tubes can also germinate in vitro even without contacting a stigma. If you place a pollen grain in germination medium, which contains calcium and boron, among other things, the tube will germinate but it will not grow to its full length.

I would recommend that Swanson paper if you want to read more.

Not the answer you're looking for? Browse other questions tagged botany reproductive-biology flowers or ask your own question.