Myrmarachne plataleoides is a jumping spider that mimics the Kerengga or weaver ant (Oecophylla smaragdina) in both morphology and behaviour. However, the two sexes appear different: 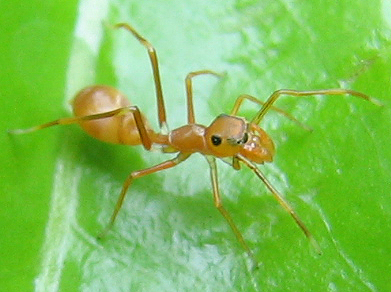 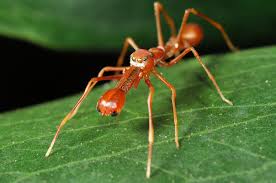 Some links suggest that in dimorphic arthropods the females more exactly mimic the model. Is this true? If so, why would this sex difference exist?

In sexually dimorphic ant-mimicking spiders, it depends on the specific species which sex resembles the ant most (Cushing, 2012).

In many cases of sexually dimorphic spider myrmecomorphs, the male is more mimetic than the female, such as in Corinnidae species and the genus Castianeira, Oonopidae and Antoonops.

Such sexual dimorphism may be adaptive if the sexes are exposed to different predation pressures. The spider's mimicry of noxious ant species yields protective benefit from predators who would avoid the ants. However, the mimicry often results in being more conspicuous in their color markings than related spider species that are more camouflaged. Hence, conspicuousness can be considered a cost of Batesian mimicry. A palatable species may be evolutionary maximizing its level of protection for the smallest cost (in terms of conspicuousness). Sexual dimorphism, in which the more active sex (which, in spiders, is typically the males) evolves mimetic resemblance to noxious ants, whereas the other sex remains relatively more concealed and camouflaged behaviorally and morphologically.

Not the answer you're looking for? Browse other questions tagged entomology adaptation arachnology sexual-dimorphism antipredator-adaptation or ask your own question.

11
Can spider silk be synthesized to be used for 3D printing?
1
Why some traits are more desirable in the sexual selection?
3
Is it necessary for spiders to both wrap the prey in silk, and inject them with venom?
1
More general term than “adaptation”
4
The emergence of Phengaris butterflies from ant nests