How does coconut water solidify into hardened coconut meat?

At first, the coconut is filled with liquid endosperm. Later when it ripens, the outer layers form brown fibrous covering, and the inner solid layer turns brown and hardens. Within that, a white layer forms (which is soft and thin at first and then gradually hardens and thickens). After ripening, there is a white layer with very little fluid. So, it's gotta be the liquid endosperm which has hardened over the course of time to form the white layer. So, how does it harden?

There are three types of endosperms encountered in botany - nuclear, heliobial and cellular. The endosperm of Cocos nucifera is both special and interesting.

Initially, the cocunut is a nuclear liquid endosperm. Meaning, it is a coenocytic liquid tissue with lots of rapidly dividing nuclei. The reference I cite here (although pretty old), states that it is safe to assume the fluid to be the 'sol' phase of cytoplasm. At some point, gelification of the sol surrounding the nuclei occurs and cellular boundaries start to appear.

These cells and nuclei start to settle down on the endothelium (inner lining of the integuments) and the cells divide to produce a columnar sort of a covering over the it. This is what forms the characteristic coconut meat. Development of the cellular endosperm is by coalescence of these deposited cells and nuclei at the antipodal end (bottom end of the fruit) and continues towards the top end. You might have noticed that the meat is thicker at the bottom but thins out towards the top.

The cells right above the endothelium stay meristematic for a long time while the columnar cells on top of this meristematic layer grow radially inward. 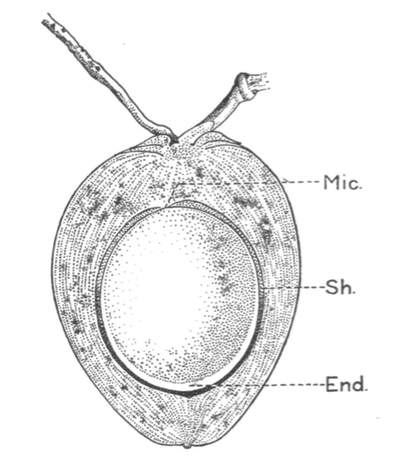 If the terminology seems confusing, the bottom end is the antipodal end. End. in the diagram stands for endosperm - the coconut meat. The Sh. is for the shell, which is the thickened inner integument. The inner lining of this shell has been referred to in this answer as the endothelium. Mic. stands for micropyle where the stalk (pedicle) of the fruit is. It is at the micropylar end that the embryo is placed. Remember! The coconut meat is not the growing embryo.

How does the meat harden?

As said, initially the deposited mass of cells and nuclei is jelly like and slowly hardens after proper cell wall synthesis etc. The hard white coconut meat that can be grated, is end stage of maturation and is formed when the above said tissue architecture has been established.

What happens to the coconut water?

After the cellular endosperm has reached its final state a little water is still left in the coconut. This water is opalescent compared to the clear water found in younger fruits. Interestingly this water is now totally devoid of nuclei.

Whether the decrease in liquid is the result of its incorporation into the endosperm cells or due to evaporation due to drying and cracking of the pericarp remains uncertain.

Sorry for the anticlimax. But this has been quoted from a 1955 paper. I was unable to find newer papers. Little work has been done in morphological botany in the recent past, but I'm pretty optimistic the answer would lie somewhere in literature.

Not the answer you're looking for? Browse other questions tagged botany plant-physiology fruit or ask your own question.

8
How does water move throughout plants?
4
How does boiling water revive cut flowers?
5
How does Pothos grow in only water?
38
Why does a coconut have exactly three "holes"?
10
How fast is water transported from roots to leaves?
6
How does coconut form?
4
Why does the seed of the coconut tree have a liquid in it?
1
How does transpiration help in sucking water up?