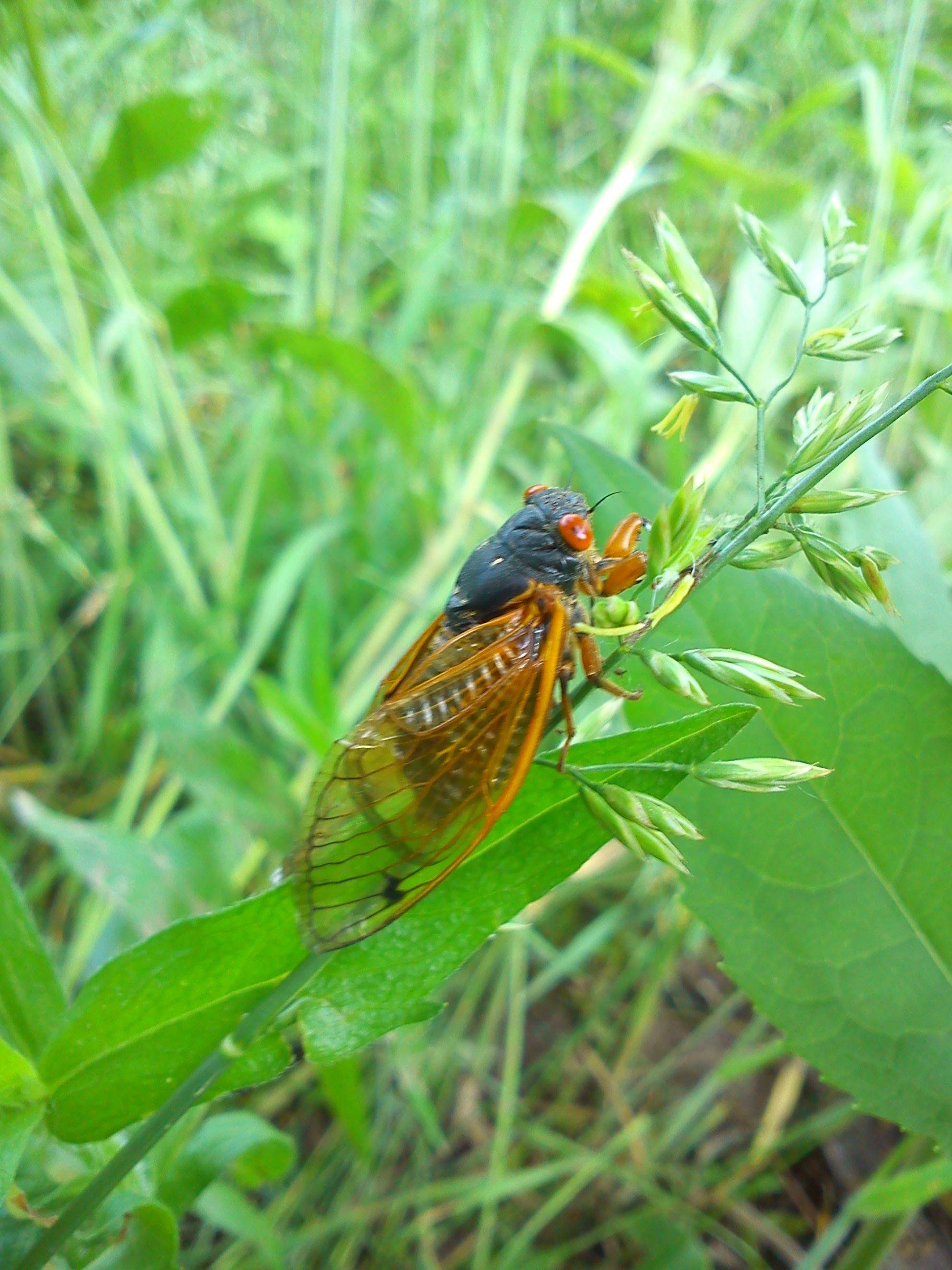 I came across a black cicada in northwest Missouri last week (May 2015). I am only familiar with brown cicadas. What makes this black one different? Is it a different species, or do the brown cicadas change color at some point in adulthood?

entomology species-identification
Share
Improve this question
edited May 14 at 6:21

A little digging on wikipedia seems to have answered my question. This picture of a 17 year cicada, Magicicada septendecim is pretty close to what I saw. 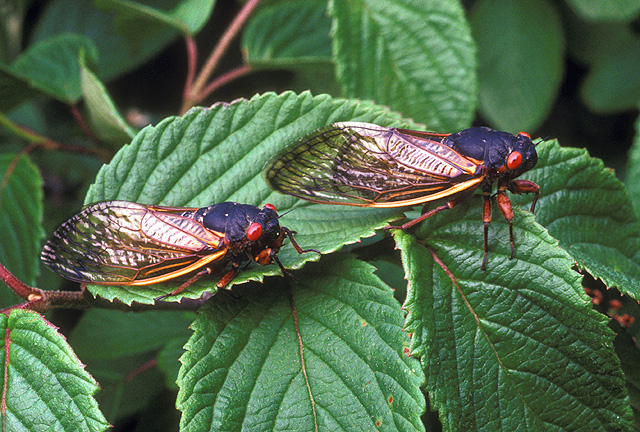 Furthermore, this seems to match the time and place, as the Kansas Brood of 17 year cicadas is scheduled to emerge this year and should appear in the Missouri-Kansas area. It also explains why I'm not familiar with these cicadas, 17 years ago I wasn't paying attention to them.

This is Magicicada septendecula, one of the three species of 17-year cicada (colloquially, "17 year locust") native to the Eastern United states. 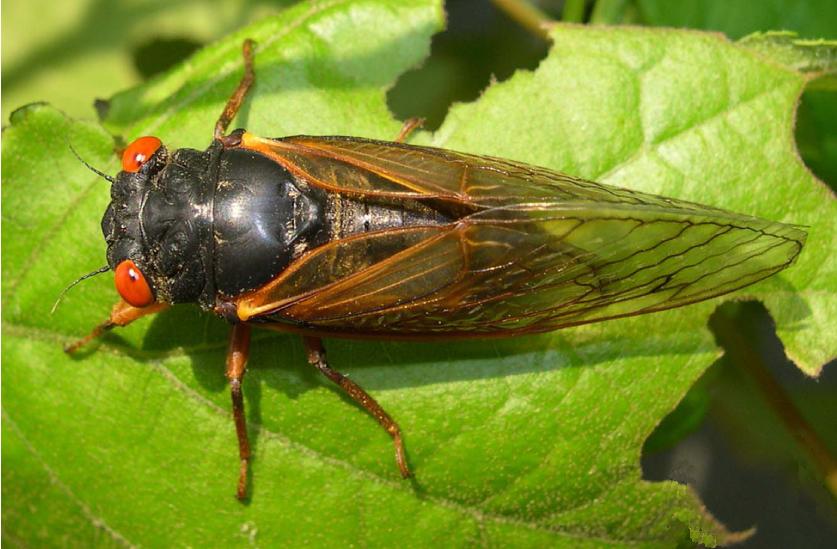 Periodical cicadas are the only group of dark-bodied cicadas with bright red eyes and orange/red-tinted wings (at least I don't know of any others). These cicadas, all of which are in the genus Magicicada, can be divided into 13-year and 17-year cicadas, each with multiple potential species:

These species tend to form mixed-species cohorts called broods in which all members of a brood synchronously emerge at the same time (every 13 or 17 years). There are 23 broods found in the US that emerge in different years, and the broods are identified by Roman numerals (I-XXIII). [Source: Scientific American]

We don't have the greatest view of the abdomen and we have no definitive reference for size (at least to differentiate a couple of mm), so this makes ID a bit more difficult. However, it does appear that there are bands of orange striping seen on the lateral sides of the abdomen in the OP's image, suggesting we can rule out M. cassinii. 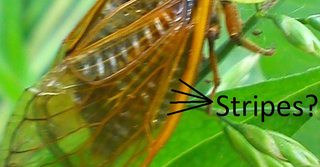 Lucky for us, there is one additional way to identify between the other two species. Again from CicadaMania.com:

The pronotal extension is an extension of the pronotum that lies between the Magicicada’s eye and its wing (outlined in green in the photo below). M. septendecim have orange coloring in that area, which gives us a key way to visually distinguish them from M. septendecula. 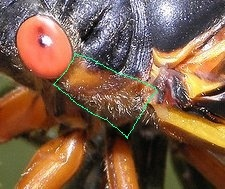 Sure enough, the OP's specimen does not have an orange pronatal extension... 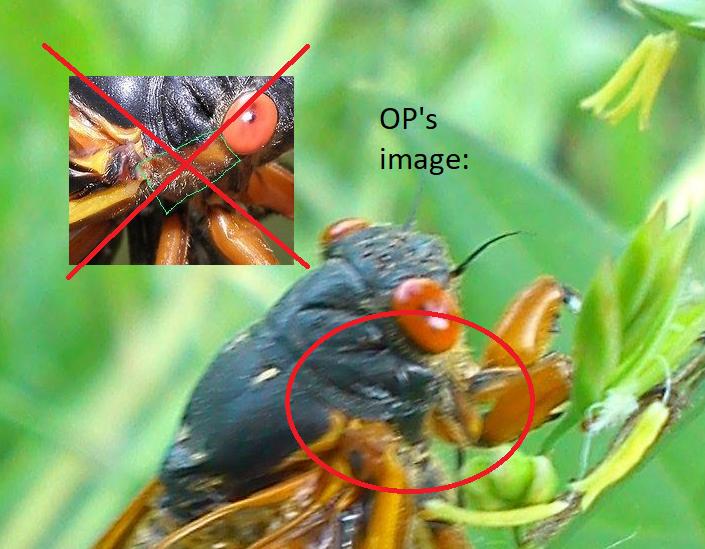 ...suggesting that the OP's species is M. septendecula!

Also, FYI: cicada adults do not change colors. The 5th molt prior to the adult stage, which leaves behind the familiar exuviae clinging to a tree trunk, is the final anatomical change cicadas undergo in their life cycle. [See here for more]

It's difficult to be sure without seeing the specimen more from the side (or ventrally), but the lack of visible orange color between the eye and the wing articulation suggests that it could be one of two other 17-year cicada species, Magicicada cassinii or M. septedecula (all three species emerge synchronously; their different songs isolate them reproductively). M. septendecim has the lateral orange color. M. cassinii is the most common of the three species in the 17-year brood that came out in 2015.

Cicadas do not change much in appearance during their short adult lives.

2
Identification of this humpbacked, brown, clawed insect climbing up my wall?