What can cause a lump in the middle of the neck? (homework case study) [closed]

What can cause an erythematous, fluctuant, nontender mass in the middle of the neck? 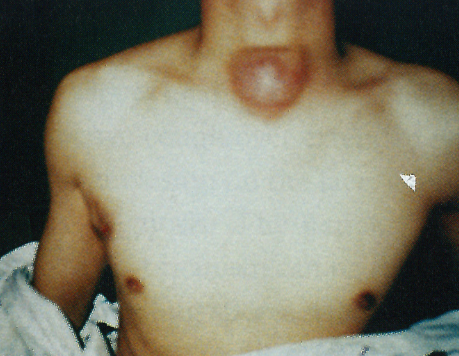 Full Case Study: (Its the last of 6 cases and I just can't figure this one out, because of all the possibilities, there is always something that doesn't line up.)

The 26-year-old man presented for evaluation of a neck mass and a right axillary mass. The patient, who came to the United States from Vietnam 6 1/2 years ago, noted midline neck mass. The mass gradually increased in size. Approximately 3 weeks prior to admission, he noted a midline neck mass. These masses were incised and drained twice. Samples of purulent material were sent for routine bacterial culture at an outside hospital. The patient had lost 3 kg (ca. 7 lbs) in the 2 months prior to admission but denied fever. Travel history was notable for his having lived in Arizona for 6 years prior to moving to Boston.

On examination, he was afebrile. An erythematous , fluctuant, nontender mass (8cm x 6cm) was present in the midline of the neck. (Fig. 5.1) (computed tomogram[CT] scan in fig. 5.2).The right axilla demonstrated incision sites that were draining and were tender to palpation. He had no adenopathy elsewhere. His (PPD) purified protein derivative skin test was reactive, and his chest x-ray was notable for apical scarring in the right lung.

Several days after the neck mass was drained of several milliliters of purulent material for culture, a mold was found to grow on the blood agar plates in the routine bacteriology section of the microbiology laboratory. The mold was white (Fig. 5.3) and initially did not have any identifying characteristics when a lactophenol cotton blue preparation was examined under a phase-contrast microscope. It was subcultured at both room temperature and body temperature, and after subculture began to demonstrate the presence of spores microscopically (Fig. 5.4) The identification was confirmed by using a commercially available genetic probe.

microbiology homework pathology medicine
share|improve this question
edited May 29 '15 at 14:10

You ask for the fungus causing An erythematous , fluctuant, nontender mass (8cm x 6cm) was present in the midline of the neck.

On the brink of question closure I decided to do a quick search. Based on your descriptions, I found a possible culprit.

In the referenced paper they talk about a fungal Cryptococcosis infection causing, and I quote:

[A] fluctuant, non-tender mass, five by five cm. in the right costal vertebral angle which was not red or warm.

So this mass was found on the costal vertebral angle, but the remaining symptoms seem reminiscent of your case study. Fungi generally appear white when plated, as far as I know. However, more information is likely necessary to confirm this genus and identify the species. 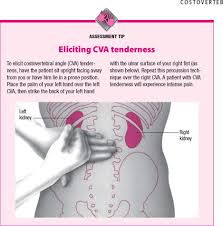 Not the answer you're looking for? Browse other questions tagged microbiology homework pathology medicine or ask your own question.

1
Is this case Histoplasma capsulatum?
2
What can thrombosis lead to?
6
Case study and speculations on the brain of Edward Mordake
0
How does the intracellular accumulation of cyclic AMP cause edema in case of anthrax?
0
Can upper motor neuron lesions cause hypotonia?