Do babies resemble their father?

An often heard theory is that newborns and babies resemble the father more than the mother, a theory apparently ignited by a Nature paper by Christenfeld and Hill (1995). Figure 1 shows one of the tests images. His subjects had to guess which picture was the real dad and which was the real mom. It turned out that tested subjects were indeed significantly better at guessing dads than moms. 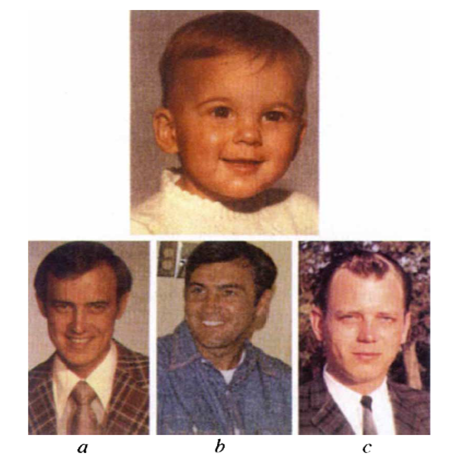 It is suggested that paternal matching of a baby promotes identification of the father with his offspring. In turn, self-identification in his kin would prevent the father from doing harm and stimulate protective paternal behavior. This then is hypothesized to increase survival rates of his offspring and et voila, a trait is born (pardon the pun) that makes baby paternal look-alikes fitter than those that don't. This hypothesis seems to have become part of parenting folklore.

However, a Scientific American paper by Matson (2011) contests this view and puts forward several primary research studies showing no preferred resemblance between mother or father, or even predominantly maternal features in babies.

Is the resemblance between father and baby fact or fiction?

Resemblance between parent and offspring is certainly true. Some traits are more obvious than others, for example skin colour would be very obvious. As babies mature they will gradually begin to look more and more like their parents, the features of babies often change rapidly, for example pretty much every baby has a little nose, but by the time they are a fully grown adult it probably resembles that of one the parents fairly well.

More obvious example would be height - imagine being presented with a baby and two males who are identical in every way, except one is two metres tall, and the other is 1.5 metres tall. As a baby it would be very difficult to assign paternity on the criteria of height/size, but as the child develops it would likely become easier and easier.

The resemblance between parent and offspring relates to the heritability of a trait but, because there can be temporal variation within an individual, heritability can only be properly determined by measuring the traits in parent and offspring at the same time point (e.g. father's height at 18 years old and son's height at 18 years old), otherwise it will introduce noise in to the estimation, likely reducing the estimate of heritability (and specific to your question, making it harder to assign paternity based on phenotypic characters).

In the context of your question: Ability to assign paternity would depend on a) the resolution with which the traits available can be distinguished among all individuals in the test and b) the variance among all individuals in the test. E.g. If the only trait available was number of fingers per hand, and all potential fathers and the child had five then the lack of variance would make it impossible to use this as a criterion, while if both one of the potential fathers, and the focal baby, had six fingers on one hand then there would be pretty good clue.

Whether babies more resemble their fathers more than mothers (which I think is the true question you are asking here) there is evidence from Drosophila that within-sex heritability is much higher than cross-sex for lifespan and aging, i.e. the lifespan of males (females) far more resembles the lifespan of the father (mother) than the mother (father). This would suggest that there is a sex specific element. Meanwhile there is evidence of high cross-sex genetic correlations in humans preventing males and females from becoming more different (thus maintaining resemblance to opposite sex parents). I would think that resemblance to the father could offer some benefit in assigning paternity by care giving males (stopping males devoting resources to other males offspring) but some of the resemblance could be generated by genetic correlations to sex-specific genetic variance, for example, males (females) will look more like their father (mother) in many ways purely because they are of the same sex, so it will heavily depend on the traits you look at to judge resemblance.

For a related answer about heritability on biology SE see:

Is it possible for a child to grow taller than their tallest parent?

Not the answer you're looking for? Browse other questions tagged evolution development or ask your own question.

7
Is it possible for a child to grow taller than their tallest parent?
1
Y-chromosome and phenotype

6
How did giraffes develop their rete mirabile failsafe?
4
How animals maintain their body shape after development to maturity?
6
Do babies conceived naturally or artificially have any differences in long-term health?
5
Is there any evolutionary reason for why some organisms (wrasse) change their sex in adult stage?
9
Why babies cry after they are born?
3
Parents that eat their own children
0
Why aren't human babies considered larvae?