How are smell and taste in fish differentiated?

The senses of taste and smell in different fish classes are described as two distinct senses; smell is mediated by the nasal openings, and taste by epithelial taste buds.

They are both forms of chemoreception and therefore it is not clear to me what intrinsically defines them as two distinct senses. The more so because reception of chemical substances is mediated by water. 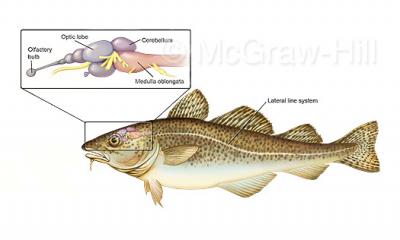 Schematic of olfactory system of a fish (not all structures shown). Source: Global Warming Australia.

Not the answer you're looking for? Browse other questions tagged physiology zoology sensation olfaction gustation or ask your own question.

7
Why do fishes have both a gustatory and an olfactory system?

5
Are fish and reptilian scales homologous?
3
Are the cells (structures) of deep sea fish different? And can they survive in shallow water?
7
Why do fishes have both a gustatory and an olfactory system?
3
Are fish averse to extreme heat?
11
Why do cyanide and arsenic smell like almonds and garlic, respectively?