Why don't most animals have "heads" in the middle of their bodies? [closed]

For example, humans. It would seem like, to me, if our brains and eyes, ears, etc. were situated in our stomach area they would be more protected from harm and more central than up at the top in and on a fragile skull. The same goes for other organisms. For example, horses have eyes on the sides of their heads; why wouldn't the eyes be near their stomach area? To me, it would seem like it would make it more safe and the horse could still see alot. I looked at this question, but it didn't fully answer my question. 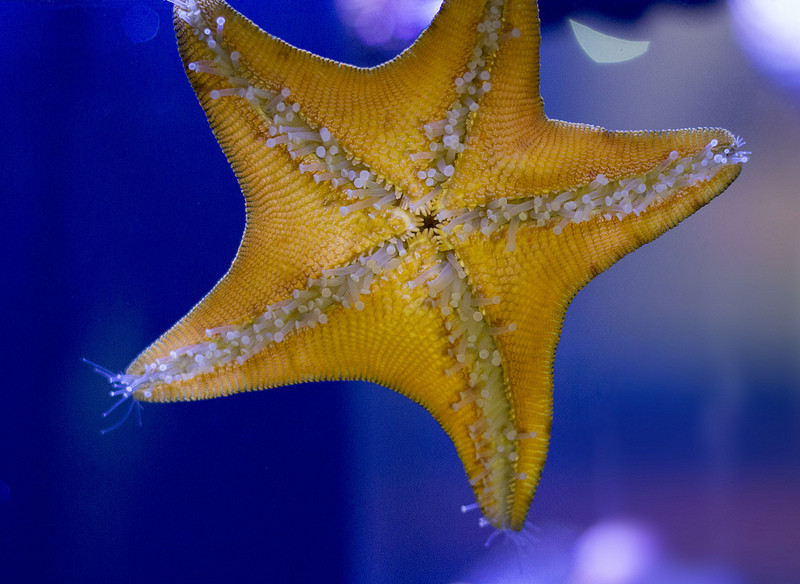 Animals with a "front" and a "back" are known as Bilaterians. There is ongoing scientific debate about what the most recent common ancestor of the bilaterians, or "urbilaterian", was like. One proposed form is a simple wormlike animal with some form of eyelike structures, a segmented body with internal organs, and a centralized nervous system. This is contrast to animals like jellyfish which have radial symmetry with a central mouth and a network of nervous system structures distributed throughout the body.

Bilateral animals often exhibit directional motion with a defined "front" and "back" end. Eyes and other sensory structures are positioned at the front end so the animal can sense where it is going and what it encounters. The brain is located near the eyes because these structures require fast, intensive information processing. This process may also have been constrained by development, since evolution occurs by gradual modifications to the existing features of an organism. The Wikipedia article on cephalization has some more discussion of this topic.

Here is an example of two possible urbilaterians, taken from (Hejnol & Martindale 2008):

Image (a) shows a "traditional" model with segmentation, an anteriorly-located mouth (light blue), and a central nervous system (yellow). Image (b) shows an alternate model proposed by the authors of the paper with a mouth in the middle of the body and a decentralized network of neural tissue.

Here too is a speculative answer, but evolutionary why questions are many times speculation, as it cannot be directly scientifically tested (there are no animals with a head in their tummies), only inferred in retrospect. I will sum up a few reasons to build the eyes and ears into a solid, rotational structure and not in the torso:

I think part of the reason is that our distant ancestors were aquatic - fish, for us vertebrates*. Living in the water, fish need to be streamlined, so a long, narrow body plan works well. Given this, and adding in the often limited visibility underwater, it makes sense to put the mouth towards the front, and sense organs near them, since they get to the food first.

This body plan got inherited by the descendants of that first fish to crawl out on land. It would require a major re-organization of the genes to get a radically different plan, and there was no great evolutionary pressure towards some different one. In many cases the mouth & eyes in the front works best - for predators, of course, but also think of a giraffe trying to browse on trees if its eyes were near its stomach. For most land vertebrates, food goes directly to the mouth. Only a few types - humans, elephants, and so on - have anything like hands to get food at a distance. (And if you look at an elephant, they do seem partway to a mouth near the stomach plan.)

If you think about creatures like the starfish, that have a central mouth, "brain", and sense organs, their food tends to be sessile. The starfish commonly crawls on top of its prey, and everts its stomach to digest it, so their the radially symmetric body plan works well.

*I don't know that much about arthropod evolution, but am guessing similar logic applies.

9
How does the eye know whether to focus further out or nearer in order to bring a blurry object into focus?
9
Are unilaterally deaf people able to determine where sound comes from?
9
How can bats achieve good resolution with wide beams?
8
Why did the Brain develop in the front in most organisms?

29
Why do we grow so much hair on our heads compared to our bodies?
7
Why don't all ants have wings?
8
Is the ratio Brain Mass/Total Mass still considered a valid indicator of intelligence?
8
Like other animals, why humans don't have species & breeds?
5
Why do marmosets have claws when most primates don't? What is the structure of their hands like?
0
Why don't mitochondria have plasmids?
5
Why did we lose our fourth type of cone cell (in the eye)?