What is the relationship between Homocysteine and Norepinephrine metabolic cycles?

I've been researching neuromodulators and have taken a look at the Norepinephrine/Noradrenaline system.

The diagram of biosynthesis of Norepinephrine is presented in the wikipedia article:

This article describes the homocysteine biosynthesis

I would like to understand what this means when two biosynthesis cycles are related like that. If I envision two cycles as connected gears, then turning one would turn the other, and if one is malfunctioning, so will the other. Is this a correct analogy?

What are the implications of the Homocysteine and Norepinephrine cycles touching each other? As far as I understand, Epinephrine(Adrenaline) is a stress related hormone, does this mean that stress also results in elevating the levels of Homocysteine ?

Thank you for your clarification!

Norepinephrine is converted to epinephrine by phenylethanolamine N-methyltransferase (PNMT). In mammals PNMT is just one member of a large family of methyltransferases which use S-adenosylmethionine (AdoMet) as a cofactor to provide a methyl group. These methyltransferases are involved in a very diverse set of pathways including the synthesis of nucleic acids and of certain phospholipids, as well as the methylation of DNA and histones.

As you point out, these reactions generate homocysteine via S-adenosylhomocysteine. However, because AdoMet is such a critically important cofactor it is thought that cellular levels are tightly regulated. As part of this regulation, homocysteine is re-methylated to methionine via two different routes requiring either methionine synthase or betaine-homocysteine methyltransferase. Methionine synthase obtains the required methyl group from 5-methyltetrahydrofolate in a vitamin B12 (actually methylcobalamin)-dependent reaction. This latter reaction links the AdoMet-based methyl transfer system to the other part of the cellular one-carbon economy, the folate pool. This is why vitamin B12 deficiency leads to hyperhomocysteinemia. 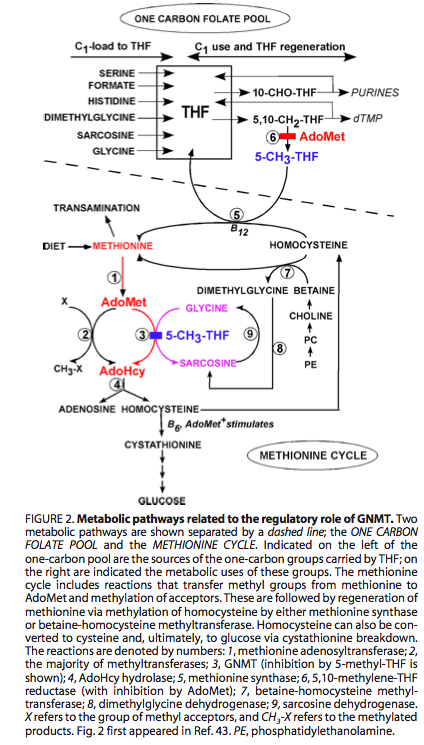 This Figure is reproduced from Luka et al. (2009) Glycine N-methyltransferase and regulation of S-adenosylmethionine levels. J. Biol. Chem. 284:22507–22511. I show it here just to illustrate the point that there are, in fact, many gears interacting in this system. The minireview is interesting and I recommend it to you.

In conclusion, my answer to your question is that it is unlikely that stress leads to elevated levels of homocysteine as long as all of the relevant regulatory machinery is functioning correctly. If there is a problem with homocysteine recycling then yes, homocysteine levels would rise, but given that there so many AdoMet-dependent methylation reactions it is unclear how big a contribution PNMT would make to the overall homocysteine load.

Not the answer you're looking for? Browse other questions tagged human-biology homocysteine neuromodulation neurotransmitter or ask your own question.