Why is Electrical Cardioversion contraindicated in AF and Digitalis Poisoning?

I am thinking why electrical cardioversion is contraindicated in atrial fibrillation with digitalis toxicity/poisoning.

Cardiac digitalis is also called digoxin and cardiac glycoside. It is antiarrhythmic agent against supraventricular arrhythmias. It is contraindicated in Atrial Fibrillation with digitalis toxicity. The Pubmed's article about the topic is a stub without describing its Pharmacology.

Digitalis toxicity is a complication of digitalis therapy, here used for atrial fibrillation. This may be due to kidney failure when the medication accumulates in the body. Its treatment is activated charcoal and gastric lavage. However, assume that these methods do not help in treatment or that we in acute digitalis toxicity.

I think the reason why we cannot recently do electrical cardioversion in digitalis poisoning is the high probability of repolarizing incidences so the likelihood to stimulate heart at the right moment is very small. This is because digitalis poisoning is associated with cardiac disturbances: ventricular tachycardia, ventricular fibrillation, SA block and AV block. Without knowing more precisely about the complication, I think the electrical cardioversion has high risk of failure.

Why is electrical cardioversion contraindicated in Digitalis Poisoning of AF treatment?

The mechanism of action of digitalis-like preparations based on inhibition of myocardial NA+/K+-ATPase as well as of cardiac conducting tissue. The inhibition of latter (conducting) is 2.5 greater than those of former (myocardial). This is why the main feature of digitalis intoxication are arrhythmias due to ectopic electric impulses and spontaneous depolarization (there is overloading of conducting system by Calcium as well as excess amounts of Noradrenaline released from sympathetic endings).

In a study in patients with therapeutic nontoxic digitalis levels determined that these patients may safely undergo electrical cardioversion without reducing or withholding the dose of digitalis. Thus, the cardioversion is not contraindicated in a patient without signs of digitalis toxicity.

Excerpt from the article mentioned: 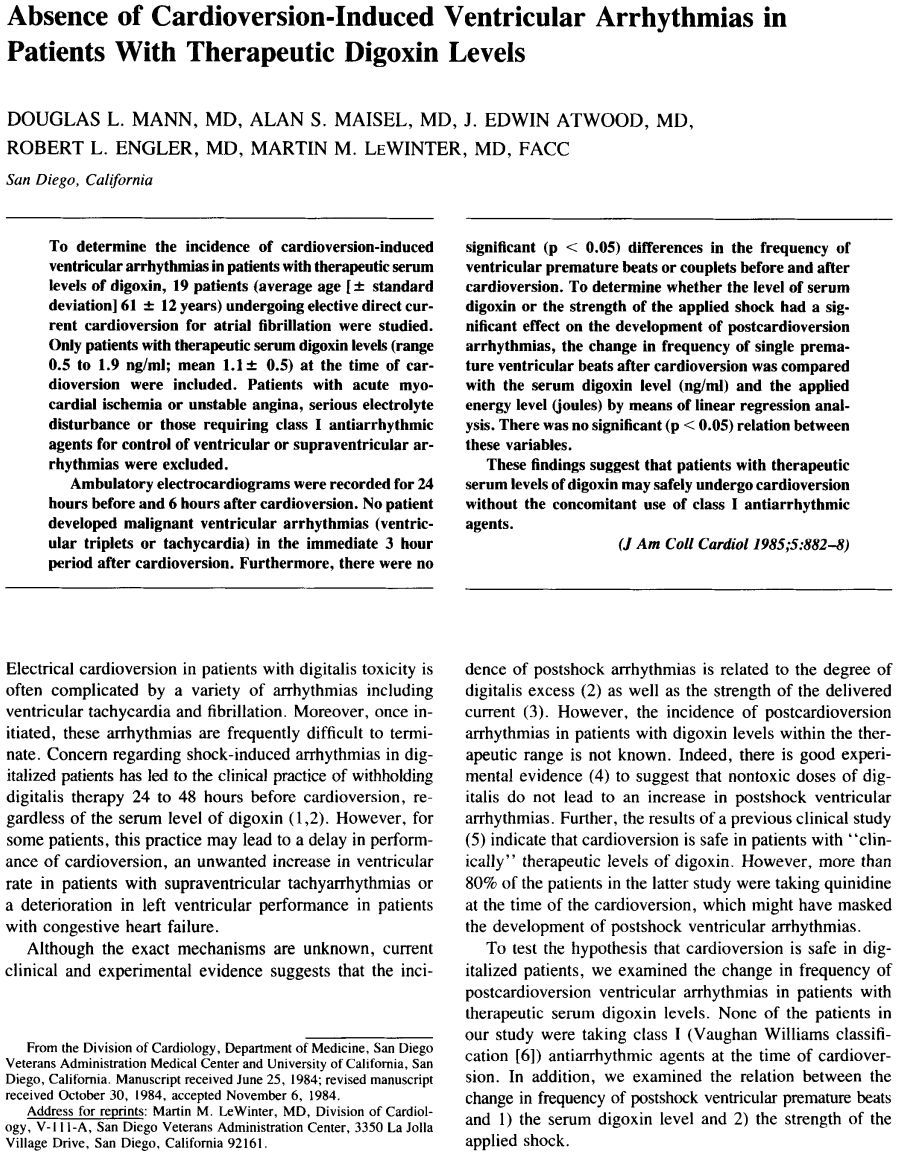 Not the answer you're looking for? Browse other questions tagged pharmacology cardiology toxicology electrophysiology electrocardiography or ask your own question.

4
How long do the periods of systole and diastole last?
0
what is the difference between osciloscope and electrocardiograph?
3
Why don't macaws get selenium poisoning from brazil nuts
1
Difference between Premature Atrial Contraction and Atrial Fibrillation
3
Why is Ibuprofen contraindicated in asthma patients?