What is the distinction between the terms detrivores, decomposers, saprotrophs and saprozoic organisms?

Saprotrophs feed on dead organic matter by the means of extracellular digestion.

Saprozoic organisms are protozoans that are saprotrophs. This actually comes from an obsolete classification of plants and animals where bacteria and fungi were grouped with plants and were therefore called saprophytes if they are saprotrophic. Protozoans were considered animals; so saprozoic.

Decomposer is a broad class including both detritivores and saprotrophs.

I could not find any authoritative source for these definitions. A peer-reviewed article by Getz (2010) attempts to classify organisms based on their eating habits. 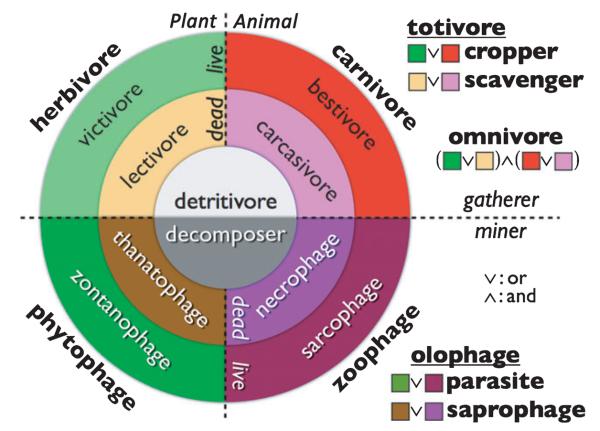 Decomposers are responsible for the "decay" of dead organisms (carcasses), dropped plant matter, and animal wastes (fecal matter) by externally breaking down the organic material and then absorbing the resulting "nutrients." This typifies the approaches taken by many fungi and bacteria. Detrivores actually feed on or consume decaying material, including the decomposers themselves, and/or other detrivores.

Not the answer you're looking for? Browse other questions tagged ecology terminology nutrition or ask your own question.