In MIT's Technology review it is explained that electric fields can cause dividing cancer cells to explode, while these fields have no significant impact on non-dividing tissues. The original research was done by Palti et al.

What is the mechanism behind this? It does not seem to be related to thermal effects.

Edit: The treatment in question seems controversial. A clinical trial showed improvement but it is not rock-solid data.

In a PNAS paper by Palti's group (2007) they explain the hypothesis behind the technique:

They reason alternating currents of 100 kHz to 1 MHz specifically affects dividing cells and thereby targets cancer cells. Note that this is the same basic idea as chemotherapy and radiotherapy, which also target dividing cells mostly. The mechanism of action of alternating electric fields on dividing cells is though to be the result of a specific effect on the bridge separating the daughter (cancer) cells during cell division (Fig. 1). They think it interferes with spindle tubulin orientation and induces electrophoretic effects (Kirson et al., 2007), resulting in a pile-up of cytoplasmatic organelles at the cleavage furrow. This is thought to interfere with cytokinesis, and to lead to cell destruction** (Kirson et al., 2004). 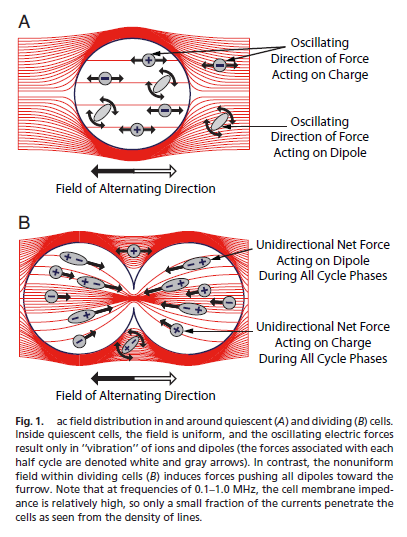 Not the answer you're looking for? Browse other questions tagged cancer electrical-stimulation biomedical-engineering or ask your own question.

6
Can a tumor produce something not currently found in our own bodies?
6
How can the phenotypic effects of a tumor suppressor mutation be silenced?
2
How can rapid growth cancer get nutrients in vivo?
5
Can neurons be inhibited with electric current?
2
Can oral baking soda effect tumor cells in mice
1
How do tumor cells 'gravitate' towards each other?