How are behaviors genetically coded in animals?

I will focus my answer on the evolution of orb web spiders (Fig. 1), because arachnids, like insects, are relatively non-complex creatures with an obvious systematic behavior (the weaving of highly symmetric, repeating structures). Hence I reasoned this would be a good approach of investigating the answer to this question.

The orb-weavers (Orbiculariae, an informal name for the taxon containing the superfamilies Deinopoidea and Araneoidea) are among the most diverse lineages of spiders (Hormiga & Griswold, 2014). 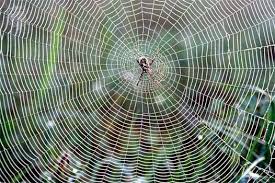 Despite this excellent opportunity to elucidate the (monophyletic) genetic underpinnings of the evolution, and hence the passing down of orb weaving, are largely unknown. Not only is the evolution of orb weaving unknown, even the evolution of the intricate physical properties of the silk are largely unknown. For example, how the sticky glue araneoid orb web evolved is a mystery. This complex multicharacter trait is hypothesized as a key innovation to explain the increase in diversity of araneoidea. For example, araneoid orbs contain viscous adhesives and they have low UV-reflectance and are hence less visible to insects. There exists one proposed evolutionary pathway from the dry, cribellate orb web of deinopoids to the sticky glue orb web of araneoids, but that's about it (Hormiga & Griswold, 2014).

In all, physical properties of silks contained in webs are hardly explained in evolutionary terms, let alone the behavioral profiles necessary to make a web out of it.

Not the answer you're looking for? Browse other questions tagged evolution genetics behaviour or ask your own question.

4
What do rs id, allele coded 0 and allele coded 1 mean?
4
Are people genetically predisposed to being interested in specific fields/ideas? How does specialization occur?
3
Why do some animals try to imitate other animals?
2
Are domesticated animals really “more intelligent,” or is that a myth/misunderstanding?
2
Is there a schema for how human behavior is genetically determined?
4
What other cognitive behaviors in bees, outside of navigation, are affect by neonicotinoids
5
How genetically similar are worker ants from the same colony?
6
Do lower animals have instinctive behaviors?