My questions are: Is my understanding of dynamic mutation correct? Is there no MINIMUM age where Huntington's will debut? In other words, if a generation is very long and has Huntington's, can a baby have symptoms at birth?

At the moment, the youngest diagnosed Huntington's case was 2 years of age. This paper appears to discuss not only this boy's onset, but also the diagnosis of symptoms in the early-onset disease.

Here they research a link between age-of-onset and the length at which the repeats are.

This image doesn't show actual mechanics of it happening, but it shows how the repeats can be added and subtracted. 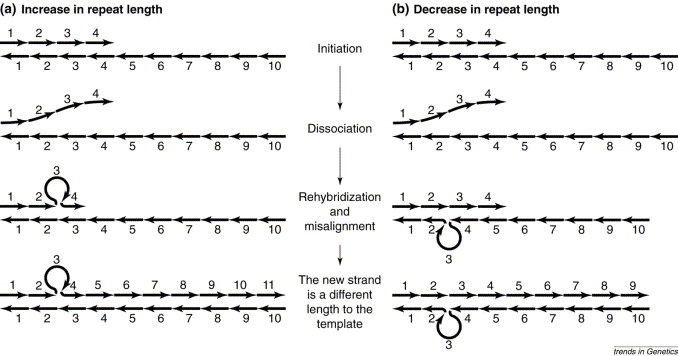 As it turns out Kayser et. al decided to look at chimps and humans to discover which of two proposed mechanisms are more likely. Their findings suggest the slippage is closest to the "heterozygote instability model".

To answer your question in short:

It appears that the "minimum age" so far is 2, however, that does not mean that it hasn't occurred earlier. Huntington's is characterised by a change in motor skills, and if the change occurs before birth it might not be noticed. In theory, it is possible that Huntington's symptoms can start pre-birth.

Not the answer you're looking for? Browse other questions tagged human-biology genetics dna pathology or ask your own question.