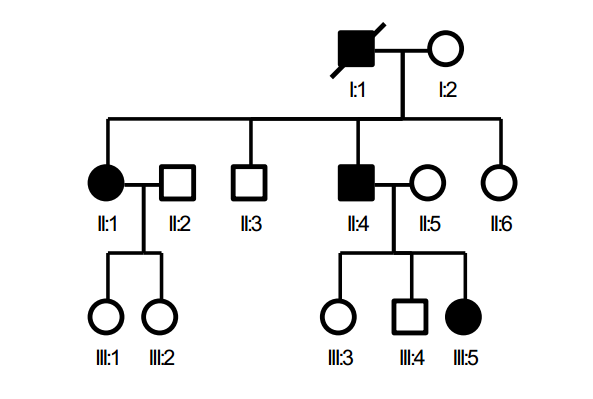 Now it should be obvious that it's either autosomal dominant or autosomal recessive. BUT it could also be X-recessive if the women I2 and II5 are carriers.

Anyways, if it's autosomal dominant than about 50% of children should be sick according to a punnet square.

If autosomal recessive about 25% should be sick according to the same logic.

33% of children are sick so what do you answer? My book states a very clear and only answer without explaining how it could be other forms too, autosomal dominant. Why not autosomal recessive just as likely?

Let's consider all the options.

X-linked recessive: I:2 is a carrier and II:5 is also a carrier, and I:1 is affected. Everyone who marries into this family(except for II:2, lucky guy. He better not have any sons though.) is a carrier for the same genetic disorder. While it does work, it's vastly less likely than the other options. Observe: II:4 is affected, but only because I:2 is a carrier. I:1 is entirely irrelevant.

Autosomal recessive: I:2 and II:5 are still required to carry the same genetic disorder, but at least I:1 contributes.

Autosomal dominant: The only individual required to have the disease genotype is the affected I:1 individual, and everyone else inherits from him.

Not the answer you're looking for? Browse other questions tagged human-biology genetics dna homework or ask your own question.

0
Identifying the inheritance pattern
4
DNA sequencing problem
0
X-recessive disorder pedigree confusing me
4
Pedigree Analysis: Problem
2
Problem: What is this pattern of inheritance?
3
Concept and analysis of Pedigree
2
Why is the mechanism of inheritance for this disease autosomal dominant?