Is the autonomic nervous system only activated by internal stimuli?

My professor claims that the autonomic nervous system is only activated by stimuli from organs but I really feel like I've read that it can be activated by outside stimuli, although I'm not sure what receptors that would be.

Is my professor right?

Background
The autonomic nervous system is a visceral sensory and motor system. The viscera are the internal organs. Virtually all visceral reflexes are mediated by local circuits in the brain stem or spinal cord (Fig. 1). It is one of two major subdivisions of the nervous system; the other being the somatic (or voluntary) nervous system. The main distinction between the two is that the latter is involved in voluntary and conscious actions (e.g., movement, perception and cognition), while the autonomic nervous system is engaged in involuntary processes, such as regulating heart rate, breathing and bowel function (Fig. 1). 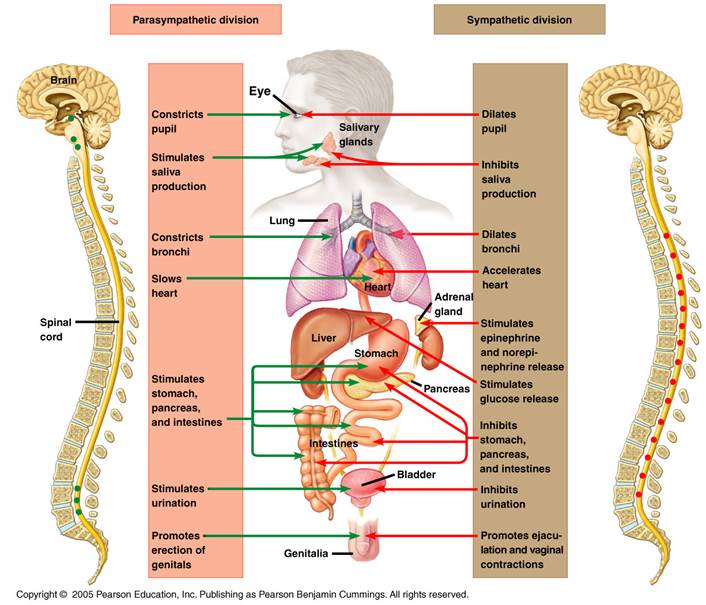 Although by far most stimuli driving autonomous responses come from within (think muscle movements driving bowel movements, increased heart rates during physical exercise), outside stimuli do directly impinge on the autonomous system.

For example, the cilliary muscle in the iris is under the control of light coming into the retina. The pupillary light reflex test is based on this principle, and is routinely used to diagnose damage to the visual system. Also, production of saliva is controlled by external stimuli (smell and taste of food and see the striking example below from @anongoodnurse). And technically, the entire digestive tract can be considered to be outside the body, as it is continuous with the skin and lining of the mouth. Hence, the mechanical stimuli impinging on the intestines by a moving bolus of food that drives the waves of peristaltic movements can, arguably, be considered to be caused by external stimuli too. Lastly, the fight-flight-fright response involving the hypothalamic-pituitary-adrenal gland (HPA) axis is often initiated by external stimuli (loud sudden noises etc.).

The most important characteristic of the autonomic nervous system, as said, is that the autonomous responses are not voluntarily controlled. While you can decide to look or track a visual stimulus, you cannot decide to move the bolus of food back up to your stomach, or voluntarily constrict your pupil. The way the input is received may not be the best way to distinguish it from the voluntary nervous system.

Didactic answer
If you are left with questions, the first place to go to is your professor.

Not the answer you're looking for? Browse other questions tagged human-biology neuroscience brain central-nervous-system autonomic-nervous-system or ask your own question.

4
Does frequency of eye blinking reveal anything about human biology/nervous system?
1
Studying the fruitfly nervous system
5
Do lobsters possess a nervous system to feel pain?
3
What is the difference between neurotransmitters acting as neurotransmitters and hormones?
0
Looking for books on How the limbic system works and it role in non-verbal behavior
1
Why isn't hearing the same as tasting? How do we feel and differentiate external stimuli?
1
Read neural activity only having access to the brain from the "outside"