I recently heard of a successful effort that harvests energy from soil at plants' bases due to apparently bacterial breakdown of wastes from the plants:

Via photosynthesis a plant produces organic matter. Part of this organic matter is used for plant-growth, but a large part can’t be used by the plant and is excreted into the soil via the roots. Around the roots naturally occurring micro-organisms break down the organic compounds to gain energy from. In this process, electrons are released as a waste product. By providing an electrode for the micro-organisms to donate their electrons to, the electrons can be harvested as electricity. Research has shown that plant-growth isn’t compromised by harvesting electricity, so plants keep on growing while electricity is concurrently produced. 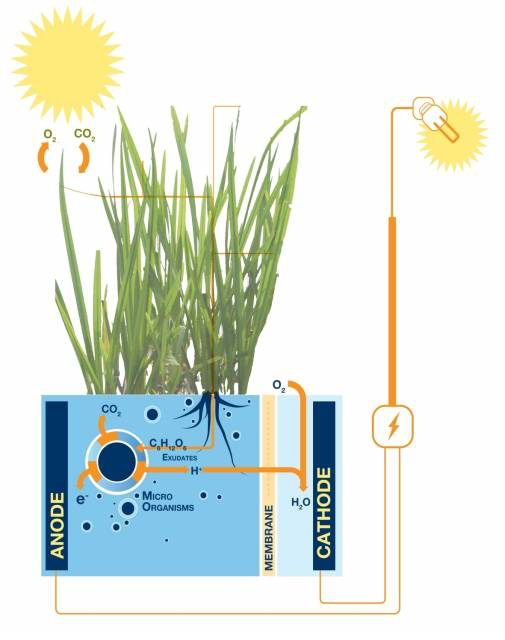 Apparently there is more research here, and this was particularly interesting (a PDF) as it states more clearly that we are indeed talking about bacteria:

The PlantPower concept is based on the cooperation of plants and microorganisms to produce in-situ electricity. Plants take up carbon dioxide and water and capture light energy. This energy is stored in the chemical bonds of sugars produced, using carbon dioxide and water. Part of this chemically stored energy is transferred to the roots of the plants. This energy present in the root zone can then be captured by the so-called electro-chemical active bacteria. These organisms are capable to oxidize the organic matter present in the root zone and transfer the energy rich electrons to an electrode. The energy carried by the electrons can be used as electrical energy, after which the electrons react at another electrode with oxygen to form water.

I would like to understand this process as far as what bacteria or "micro organism(s)" are being leveraged here. It seems that they are supplementing the soil with some kind of bacteria that acts in this specific way of releasing additional electrons that can then be harvested.

Any idea as to what kind of micro organisms or bacteria have this kind of reaction wherein they release or excrete harvestable energy (and apparently CO2 + H+) upon consumption of plant "excretions" (C6H12O6)?

After doing a bit more digging, I have found some, perhaps, interesting information from Wikipedia:

What ultimately confuses me here is that the other method noted earlier does not really emphasize any particular kind of plant and therefore I can't help but think that perhaps there are some other more useful bacteria for this scenario...

It is known that a great variety of soil micro-organisms is able to use solid anodes as electron acceptor for their metabolism, thus creating some electrical current. Geobacter spp., Clostridia and Deltaproteobacteria are among them (1). However, I could not find any extensive list of these microbes. It is likely that a large number of these microbes is not identified yet.

A review on Plant Microbial Fuel Cells was recently published and might interest you (2).

The system presented at your first figure is being developed by the Dutch company named Plant-e and falls within the concept of Plant Microbial Fuel Cells (PMFC).

Simply put, a Microbial Fuel Cell (MFC) is a device in which chemical energy contained in chemical bounds of organic substrates is converted to electrical energy by microbes. Microbes consume the organic substrates while using the anode as the final electron acceptor of their metabolism. Microbes capable of using anodes as electron sinks for their metabolism are called electrogens.

PMFCs are a special case of MFCs, taking advantage of the microbe/plant interactions. Organic substrate is supplied to microbes directly by the plant and you get two benefits: plant biomass and electricity production.

As you noted in your last sentence, no particular species of plant was cited. Indeed various PMFCs strategies were implemented, based on various species of plants, such as Glyceria maxima, or Oryza sativa (rice) (2). The plant species is not the only key factor for efficient PMFCs: the nature of the organic substrates provided by plants to microbes, the soil's characteristics, the electrodes' characteristics, and the nature of the inoculum are crucial factors too.

Regarding the microbiological aspect, it appears that pure culture (single species) PMFCs are not necessarily the best alternative. Plants provide microbes with a variety of chemical compounds, which may not be all consumed by a single species. Only a well adapted microbial community is likely to be able to take advantage of all these compounds and to include efficient electrogens. The path from plant products to electrical current is more likely to be a complex microbial food web, rather than a single species' metabolism. In practice, most studies seem to rely as soil as the incolum (2).

So, concerning your initial question: we might not have identified yet every soil electrogens. Several are, however, already well known, such as Geobacter sulfurreducens. But, what is important is that most (P)MFCs strategies rely on microbial communities as a whole, in a 'black box' way.

Not the answer you're looking for? Browse other questions tagged botany bacteriology ecology energy soil or ask your own question.

6
How much carbon does a forest contain?
5
Why do soil bacteria produce nitrous oxide as a result of anhydrous ammonia fertilizer application?
1
What is the primary energy source for sprouting plants?