How to calculate biological half life of a drug that is dose dependent?

I would like to calculate the half-life of a biological drug.

How could I extrapolate this information to get biological half-life estimate for 2 mg/kg of body weight?

Could I also graph this? for example in R?

I plotted your data using MATLAB and it looks like this: 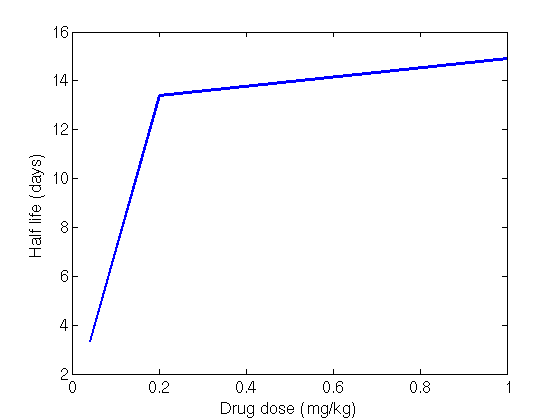 Most degradation or clearance processes happen via first order kinetics. However when the clearance/degradation machinery gets saturated then degradation proceeds via a zeroth order kinetics i.e. it becomes independent of the concentration of the drug. The half life in first order reactions is independent of the initial state. Only in the case of the zeroth order reactions, the half life is directly proportional to initial state (See here). In this graph there is a huge gap in half life, between the first and the second points. We need more data points to say anything conclusively about this observation. However, I am assuming that the clearance reaction is already in the zeroth order kinetics as half life increases with concentration (though at different rates). For a rough calculation let us consider second point onwards. By calculating the slope between second and third points you can obtain the half life corresponding to dosage of 2mg/kg.

There can be other complicated explanations too, such as the drug inhibiting its own clearance etc. But for assuming such models we would require more information.

Not the answer you're looking for? Browse other questions tagged pharmacokinetics or ask your own question.

3
Pharmacology Half Life Calculation
3
How are drug metabolism and detection related?
6
How to determine sensitivity in a dose-response curve?
5
Derivation for drug half life
2
Is an X ml dose of a drug at 50% bioavailability roughly equivalent to a 2X ml dose at 25% bioavailability?