Characters do not make the genus, but the genus gives the characters?

In his Origin of species, in the chapter entitled 'Mutual Affinities of Organic Beings: Morphology: Embryology: Rudimentary Organs', Darwin, speaking of the nature of classification systems of living organisms, writes:

Such expressions as that famous one of Linnaeus, and which we often meet with in a more or less concealed form, that the characters do not make the genus, but that the genus gives the characters, seem to imply that something more is included in our classification, than mere resemblance. I believe that something more is included; and that propinquity of descent, the only known cause of the similarity of organic beings, is the bond, hidden as it is by various degrees of modification, which is partially revealed to us by our classifications.

The assumption that Genus -> Characteristics segues into the key concept of his theory of evolution, that related species (a genus) arise from the descent with modification of an shared ancestral population. Remember that Darwin wrote long before we understand the role of DNA as the carrier of genetic information. He knew nothing about the physical substance or the mechanism of transmission that passed characteristics to offspring, but through his observations built a strong case that such a substance exists and that gradual changes in this substance occur over time in a population. He later posits that natural selection leads to the accumulation subsets of descendants with modifications that are advantageous in their environment. Thus the species within a genus could arise, their similarities the result of their shared ancestry, their differences that result of descent with modification and selection.

I'm not sure when the concept first arose but I would assume it was after Darwin had come up with the Theory of Evolution. The concept I am talking about is "Convergent Evolution" which in essence explains "characteristics do not make the genus".

Convergent Evolution is the concept that two completely different organisms, given the same selection pressures, may, independent evolve to exhibit similar characteristics. If one was to assume "characteristics makes the genus" one would think these two must be genetically similar when they are not.

One example I found illustrated from link is: 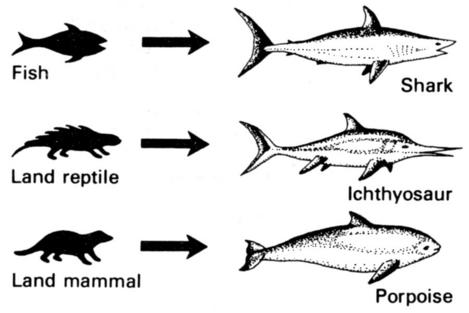 If you look at the external characteristics, we would say the 3 must be closely related - tail fin, dorsal fin, pectoral fins all pretty much the same. But looking at the bones and others we know that they each evolved from very different species. Not only are they from different genus, their divergence goes all the way up to the class level (Kingdom, Phylum, Class, Order, Genus Species).

Why then do they all look similar? The reason is they all have to deal with the common selection pressure of water. Living in water, moving efficiently in water to be able to catch prey and evade predators. Separately, they all gradually evolved fins because the ones that did not, were out competed by there "better finned" peers. The better finned shark ancestor out bred the poorer finned sharks, the better finned porpoise ancestor out bred the poorer finned porpoise. The ichthyosaur too except it finally did not evolve sufficiently and became extinct.

Not the answer you're looking for? Browse other questions tagged evolution taxonomy or ask your own question.

0
Information and image of Genus Acesina
3
Why do farts stink, but perfume does not?
7
What is the proper format for genus and species names in latin?
4
Why are sponges sometimes not considered multicellular?
1
Would chimpanzees and humans normally be in the same genus if we weren't so sensitive about it?
0
Difference between Genus, Genus sp. and Genus spp
2
Are Triceratops and Eotriceratops similar enough to be considered as the same genus?
0
Can two different species in the same genus generally succeed in the same habitat?