I just finished watching a video where it was mentioned that nowadays birds are dinosaurs and non-avians dinosaurs could have feathers.

I confirmed this from wikipedia:

Birds are highly advanced theropod dinosaurs, characterised by feathers, a beak with no teeth, the laying of hard-shelled eggs, a high metabolic rate, a four-chambered heart, and a lightweight but strong skeleton.

Direct fossil evidence of feathers or feather-like structures has been discovered in a diverse array of species in many non-avian dinosaur groups, both among saurischians and ornithischians.

And this family tree of reptiles mentions:

And later in the Mesozoic era:

So, were these non-avian dinosaurs with feathers actually reptiles?

Source of information on Biology.SE

This answer offers an introduction to phylogeny on the case study of dinosaurs and birds. If you are not at ease with the concept of monophyletic group, you should definitely have started with this introduction.

Origin of your misunderstanding

The question is all about nomenclature (and a little bit of semantics). One can call reptiles whatever (s)he wants. The question is what do we define as being a reptile? And the answer is that there are two possible definitions, a common "bad" definition (Definition 1) and a phylogenetic-based "good" definition (definition 2). I think your confusion comes from the use of the same term to mean two different (but related) things.

In general, when people talk about reptiles, they talk about turtles, Rhynchocephalia, Squamata and Crocodilia. In this sense, the term reptile is NOT a monophyletic group. In other words, all species being called reptiles (according to this definition) do not share a common ancestor who has no other descendants that the species being called reptiles.

However, there is a defined monophyletic group called Reptilia. Reptilia is a group that contains all Amniota except the Synapsida (mammals and their extinct close relatives). In other words, Reptilia contains all generally called reptiles (as defined above) and all birds as well as all extinct species that are descendent from this same common ancestor.

Exploring the tree of life by yourself

You will find the tree of life on tolweb.org or on onezoom.org (see The best free and most up to date phylogenetic tree on the internet? for more info).

Using tolweb.org: here are the roots of the tree of the Amniota. And you will probably want to search for the Dinosauria (there) and see how closely related they are to the birds but not so much to the turtles.

If by reptiles you mean Reptilia, then whether a given dinosaur has feathers, endothermy, or an exoskeleton (!) doesn't change anything to the fact that this dinosaur is a reptile.

If by reptiles you mean turtles, Rhynchocephalia, Squamata and Crocodilia, then whether a given dinosaur has feathers or not doesn't change anything to the fact that this dinosaur is NOT a reptile! 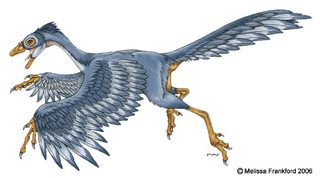 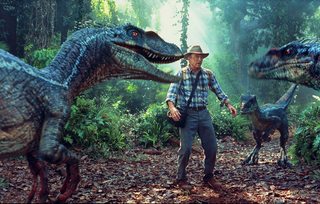 You might want to have a look at the post Were there any flying dinosaurs? that is very related.

At least, all these big and extinct things with scales are dinosaurs, right?

Well.... not exactly. There are species that you would probably call dinosaurs that we typically don't consider as dinosaurs. Have a look at the MinuteEarth video called "What makes a dinosaur?" for more information in this regard.

There have been some good answers here, but I think some information could be added.

Willi Hennig introduced modern phylogenetic systematics, which is sometimes conflicting with traditional taxonomy. Hennig's important insight was that one should only use synapomorphies (shared derived traits) as the evidence for identifying relative recency of common ancestry within and among groups. However, many groups, reptiles, fish, invertebrates, etc., are based on symplesiomorphies (shared ancestral traits).

The original question posted above can be addressed with the stem-crown group concept.

Considering the relationship of fossil taxa with living ones, we can ask the following question: do all fossil taxa fit into living clades?

Crocodiles and birds are an excellent example to address this question: From a cladistic perspective, members of each of the two clades have three types of traits: symplesiomorphies (shared ancestral), synapomorphies (shared derived), and autapomorphies (unique traits). Where would these traits appear on a phylogenetic tree?

Let us have a look at a bird with a very distinctive bill, the Shoebill (Wikipedia): 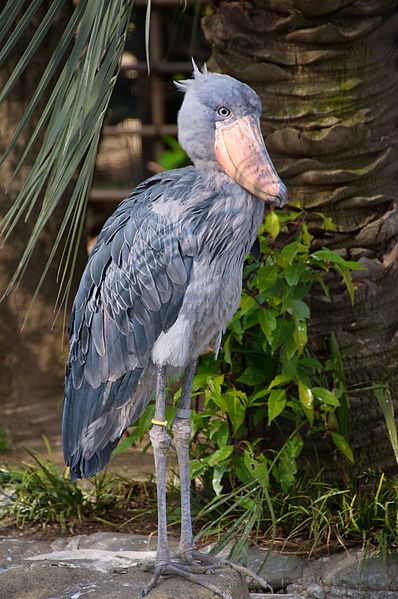 This can be considered a unique trait, thus an autapomorphy. The feathers of the shoebill is a trait it shares with other birds, thus a synapomorphy. While the shoebill's legs is a trait shared with crocodiles (the sister clade of birds) and many other vertebrates and therefore is a symplesiomorphy.

Symplesiomorphies are traits shared by the sister clade, or even more distant clades. These traits must have appeared deeper down the tree.

Another question: what sort of organism was the last common ancestor of birds and crocodiles? Was it a bird, a crocodile, or neither? What traits would it have?

By definition of our question, these two groups (crocodiles and birds) are both monophyletic, therefore, one did not give rise to the other. It did not have any of the synapomorphies or autapomorphies in either clade, only their shared symplesiomorphies, and therefore did not lie in either modern clade.

By definition, the organisms that make up the lineage of birds, appearing after the split between the clades of crocodiles and birds, but apart from living birds, must be extinct. We call this the stem group of birds.

The last common ancestor of all living birds, plus all its descendants make up the crown-group of birds. The total group of birds is the crown group and stem group together.

Stem and crown groups are hierarchical, and some crown group taxa have gone extinct, for example, the dodo. The dodo, therefore, belongs in the stem group of pigeons and doves.

By definition, all stem groups are paraphyletic, as they give rise to their crown group. All fossils fall into one or another stem group.

The original question can thus be answered appropriately: dinosaurs are stem-birds and belong in the total group of birds.

32
Is evolution a fact?
32
Were there any flying dinosaurs?
18
Why are turtles classified as reptiles and not amphibians?
9
The best free and most up to date phylogenetic tree on the internet?
5
Birds and Dinosaurs
4
Why do the ancestors of birds still exist?
5
If birds are dinosaurs, then are mammals reptiles?
4
Evolution of dinosaurs
6
Has the most recent common ancestor of all living birds lived after dinosaur mass extinction?
4
Do reptiles hunt?
See more linked questions