Is there a name for this phenomenon described in "Phylogenies and the Comparative Method"?

The figures below are from Felsenstein's paper "Phylogenies and the Comparative Method". I was wondering if there was a specific name for this effect where there is an apparant correlation that is actually the result of the data being structured into two separate groups, where there is no correlation within groups but an apparent correlation between groups. "Phylogenetic non-independence" doesn't seem specific enough. 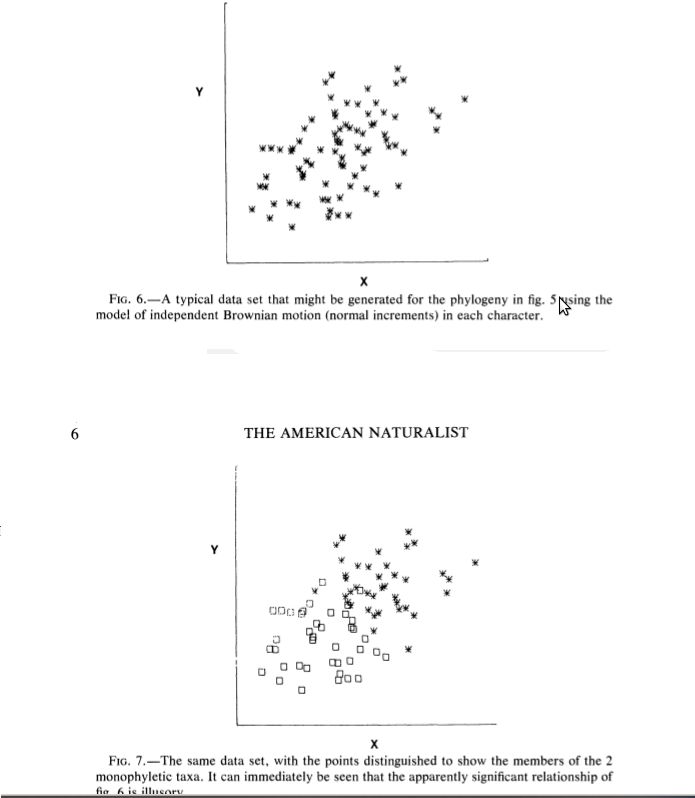 I've seen this termed "phylogenetic pseudoreplication", but I can't remember offhand where. I'll see if I can find it. Without a tree, the boxes and Xs essentially represent 2 data points. As Remi.b suggests, this is really just high phylogenetic signal.

The fact that species are not independent observations because of their specific phylogenetic relationship is sometimes called phylogenetic dependence (see its use in this paper for example).

I think (correct me if I am wrong) you're searching for a name to describe a situation where two quantitative traits correlate along a phylogeny (when you have one data point per species) but not within any of the species of this phylogeny. If this is the case, I don't think you will actually find a name for this pattern as it it is already quite specific. You could eventually say that there is an inter-species correlation between the two traits but not an intra-species correlation.

I think that the answers here are good, and @Remi.b's term is preferable, but the term in the literature appears to most frequently be "phylogenetic non-independence", e.g. here.

I don't care for this term. Why not just "dependence"? But it seems to be what folks use.

Not the answer you're looking for? Browse other questions tagged evolution terminology phylogenetics or ask your own question.

2
Terminology question about the correct term for areas of biological research
2
Is there a name for this principle in biological contexts?
4
Collective name for the X- and Z-chromosomes
12
Is there a name for the evolutionary loss of vestigial structures?
6
Independent contrasts with non-homologous traits
1
The parts of the phylogenetic nomenclature that need to be "unique"
4
What is the best argument for maximum parsimony method in phylogenetic tree construction?
2
Controlling for phylogenetic signal - what is statistically appropriate?