There is an attribute defined as DP (Total Depth) in VCF file format. For example, http://www.1000genomes.org/node/101.

What does this attribute mean? If I get a value of like DP=128. How can be that be interpreted?

So the general sequencing analysis pipeline is to generate a bunch of read sequences, figure out how they match to a reference genome and align them, then call any differences between the reference genome and the sequencing reads. The following image, from the Broad Institute's Interactive Genome Viewer, may help you visualize what is happening here. As you can see in the image, the human reference DNA is found at the top of the window, and the sequence of bases for the current selection, at the very bottom of the window. Then each of the gray bars that you see below that is an individual sequencing read that matches to that particular location along the human DNA. 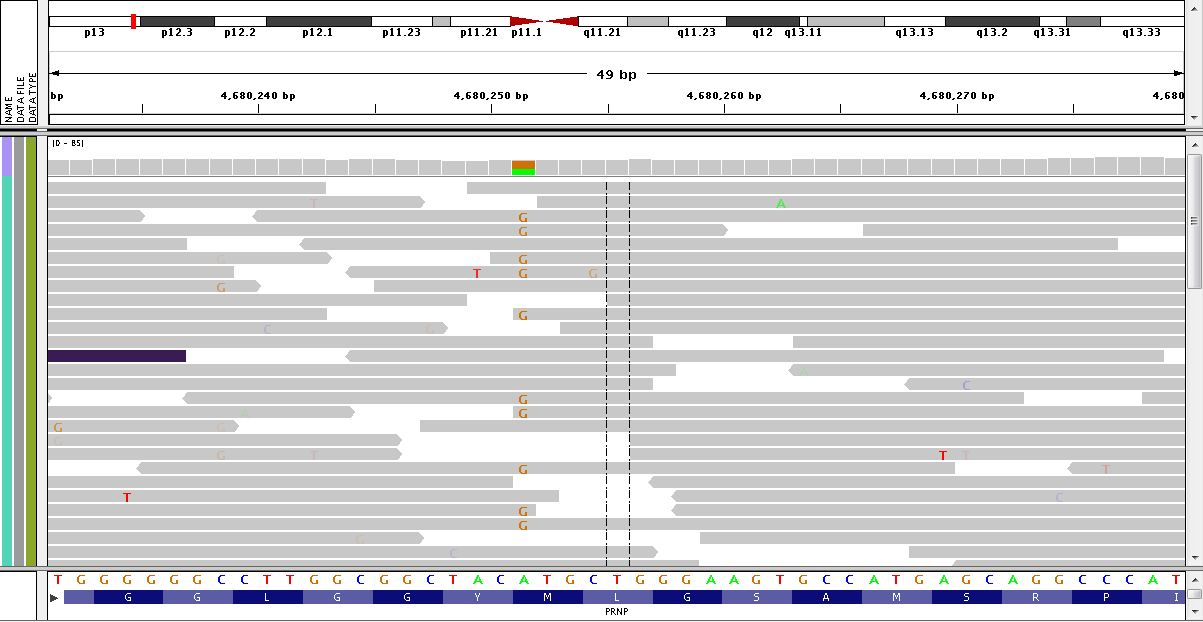 When you use a variant caller like Freebayes, it will list out information about locations along the reference genome that had differences in your actual sequences. For instance, as you bring up, DP or read depth. Looking back at the IGV image, you can see a location that had a lot of 'G' showing in the sequence reads, where the reference DNA has 'A'. Variant callers will pick up on this and list it as a possible variant. They will also tell you the read depth at that location which is the total number of sequence reads overlapping that position. In this case there are 21 gray bars (sequence reads) overlapping at that position, meaning that DP=21.

Even though it is not listed in the VCF example to which you refer, variant callers can also give other data like AO, which is times that a variant was observed, and RO which is the number of times the reference base was observed. This information allows you to decide whether or not an identified variant was a sequencing error, or a real variant.

For instance if DP=1, AO=1, RO=0, that means there was only a single read at that location and it was not what is listed in the reference genome. Because the depth is so low, and the error rate of a next-gen sequencer is somewhere between 0.5-5%, you cannot say that this is a mutation or just a sequencing error. However, as DP increases, you gain more confidence in whatever was called. So if DP=10, AO=10, RO=0 you can be quite confident that the reason you read an alternate base at a given location, it is not just a sequencing error because you read this location 10 times and every time you saw the same variant.

Let me know if I can clarify further.

That number refers to the number of reads that overlap that base pair that has the variant. Sequencing reads in this case almost always refer to next generation sequencing. These metrics and other VCF fields are used to give some indicator of confidence for variant.

6
Confusion related to gene expression
0
Problem on finding sequence of Taq polymerase
3
Sequence compression method / format
4
How could I identify whether given RNA-seq data is paired end or single end
1
An example for N50? Why do we need it?
2
GATK workflow for Cancer
3
Gemini usage of --sample-filter
1
Variant VCF: AD vs DP?