Influence of alcohol on brain cells

As I am not related to biology, I would appreciate if you can keep your answers as simple as possible.

My question is about the influence of alcohol on the brain. As far as I know, drinking alcohol is killing cells in the brain. But is it linear? E.g. if I have 1.0 per mil and it kills 1000 cells will 2.0 per mil kill 2000 cells?

(An equation would be nice)

The situation is definitely an extremely complex one, and you should probably forget about having an exact equation to define it.

When talking about the effects of a substance on the organism there are several factors to take into account. These are generally put together under the term pharmacodynamics.

Some of the factor to take into account are:

The problem is, not all ethanol you drink will go to the brain, and it will not necessarily go there immediately, or all at the same time. All of this will change the effects on the brain. Also, there are several confounding factors, some of which I have tried to list.

I have summarized here a few information about ethanol metabolism, taken mostly from Principles of Forensic Toxicology - Chapter 10 by Barry Levine and Yale H. Caplan

Ethanol is normally taken through drinking, which means that it will have to pass through the gastrointestinal (GI) tract (i.e. stomach and intestine) before getting into the bloodstream. This route permits practically 100% of absorption of ethanol in the body, with the major site of absorption being the small intestine, absorbing ~75% of a dose of ethanol. The rest will be absorbed in the stomach and in the other parts of the intestine.

The absorption in the GI tract is dependent on the type of beverage: for instance carbonated alcoholic beverages are absorbed faster than "plain" ones. The alcohol content also is important: a very diluted drink is absorbed slower than one with 10-30% of ethanol, as the latter will generate a bigger concentration gradient between the GI tract and the circulation, so it will diffuse faster. However, >30% ethanol will enhance mucus formation, which will slow down absorption. Furthermore, absorption depends on the status of the GI tract: preexisting conditions (e.g. inflammation) can modify the rate at which the alcohol enters the bloodstream.

But, we are still far away from the brain! After being absorbed, ethanol goes into the vena cava, and passes through the liver, where it can be metabolized (destroyed) by an enzyme called alcohol dehydrogenase (ADH), which converts ethanol into acetaldheyde, effectively reducing the ethanol concentration in the blood. This is a well-known phenomenon for many drugs, and it is called first pass effect Importantly, the human stomach also expresses ADH, so this first pass effect can start even before reaching the liver! The effects of ADH in the stomach obviously depends on how long the ethanol stays in there. So, it will be lower for an empty stomach then after a big meal.

Food, in fact, is also a well known factor that reduces the amount of ethanol in the blood.

For instance, these graphs show blood ethanol content in four healthy subjects after a 10 hour fast (filled circles) or after breakfast (empty circles), after drinking the same dose of 0.80 g ethanol/kg body weight, in 30 minutes. 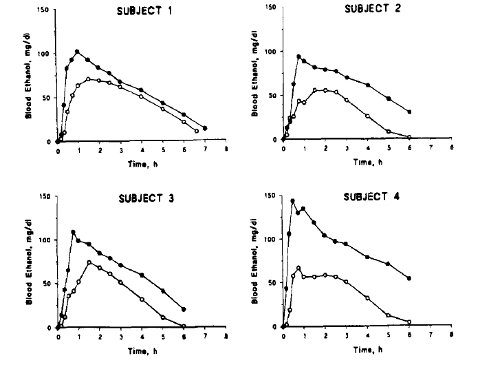 From: Food-Induced Lowering of Blood-Ethanol Profiles and Increased Rate of Elimination Immediately After a Meal - Jones AW and Jönsson KA - J Forensic Sci., 1994.

As you can see, eating strongly decrease the ethanol blood content. Also see how there is quite a bit of variation between the different subjects (if you open the paper you will also see the graphs from other 6 subjects).

Also, you can look for instance at this paper (just got a random study, there seems to be a ton of them around): First pass metabolism of ethanol. - Lieber CS et al. - Alcohol Alcohol Suppl., 1994

Coming out of the liver, ethanol goes into the right side of the hearth, and from there to the lungs. This poses no particular issue for most drugs, but ethanol is volatile! So, part of the ethanol is released through respiration (in fact the "classic" way of saying if someone has drunk alcohol is to smell his breath). However, this only accounts for a minor decrease in blood ethanol levels.

Finally, ethanol can start going around the body. Being a water-soluble molecule it will tend to diffuse into water-containing parts of our body (i.e. you will not find much ethanol in fat), which include the brain.

In the meantime, however, the process of elimination has started: ethanol can be excreted in urine, sweat and breath, although the major route of elimination is epathic metabolism by ADH, accounting for >90% of ethanol elimination.

There is a neat formula to express all of this, called the Widmark equation:

And now to the brain: ethanol does indeed have various effects on neurons. Short term effect essentially involve depression of neuronal activity, ethanol being able to modulate GABA signalling in the brain. Long term effect range from reduced neurogenesis (i.e. birth of new neurons) to reduced volume of certain brain areas, probably due to loss of neurons, to inflammation in the brain.

Again, the situation is very complex and it depends on the frequency of drinking, the amount of each drink and many other factors. A single dose of ethanol will probably have irrelevant effects on your neurons... as the amount needed (in one shot) for serious neurotoxicity will probably send you into ethilic coma. The exact mechanisms for these effects are only partially known and very likely to be derived by the interaction of numerous diverse effects.

This article explains some of the mechanisms for loss of neurons in the cerebellum.

Mechanisms of ethanol-induced degeneration in the developing, mature, and aging cerebellum. - Jaatinen and Rintala - Cerebellum, 2008

I will not go into the details of all of this, but it should be clear by now that all the things I mentioned so far (and many other factors I did not talk about) make it extremely difficult to give an exact quantification of the number of cells killed by ethanol. Surely the relationship is not linear, in fact, for instance, positive effects of small doses of alcohol have been reported numerous times.

A few more references on effects of alcohol on the brain:

Not the answer you're looking for? Browse other questions tagged human-biology brain toxicology pharmacology or ask your own question.

7
Total amount of CO₂ / Oxygen in Bloodstream in Humans
6
Can children restore brain cells?
5
How does toluene inhalation damage the brain?
5
How exactly does marijuana damage brain cells?
3
What happens if someone with mutations to alcohol dehydrogenase (ADH) drinks alcohol?
21
Supercomputer Vs Human Brain
42
Can brain cells move?
4
Relationship between toxicity of drugs and negative effects on brain
5
Do brain cells regenerate in the adult brain?