Does learning increase the number of neurons in the brain?

I am attempting to understand neurogenesis related to learning. Does learning increase the number of neurons in the human brain? What would be some good scientific publications to read?

Short answer
Training increases white and gray matter densities in the brain. This may reflect increases in neuronal cell counts especially in the hippocampus. In the cortex, however, such observed changes are probably more reflective of other processes, such as synaptogenesis.

Background
Gray matter is generally viewed as being the neuronal cell bodies, while white matter corresponds to myelinated fiber tracts. Changes in both can be reflective of changes in cellular content, but changes in gray matter are generally more directly related to changes in cell numbers, which you are after.

A striking example of the effects of learning on the brain is observed in subjects that start to learn to juggle. These people have been shown to have increased gray matter density in the occipito-parietal regions (the visual motion areas). These changes are apparent after as little as 7 days of training. Such experience-dependent changes are also observed in white matter. Occipito-parietal regions are involved in visuo-motor coordination, reaching and grasping. There have been a host of other studies that showed similar changes in the brain. For example, taxi drivers were shown to have increased hippocampal volumes.

There is good evidence for adult neurogenesis occurring with learning in the hippocampus. Adult neuro­genesis also produces thousands of new granule cells in the dentate gyrus every month, but this is a relatively small increase in total number of hippocampal neurons. Furthermore, although there have been reports of neurogenesis in the mammalian adult neocortex, this is controversial. Thus, neurogenesis is likely a minor factor in MRI changes, particularly those found outside the hippocampus.

Instead, other factors such as increase in glial cell numbers, synaptogenesis, changes in dendritic structures, axonal sprouting and re-routing and even vascular changes may underly the observed changes in imaging studies.

Note: there is a host of imaging studies available on effects of learning on structural changes in the brain. The referenced review article cites many.

The no. of neurons only increase during development.

As, a person grows, the no. of neurons is constant or decreases (degradation due to injury or other brain diseases). The no. never increases. 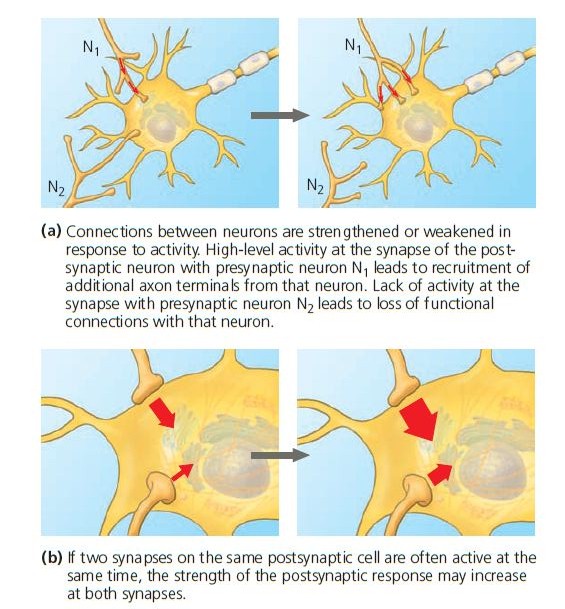 Learning anything (say, a phone no.) requires repeated thinking. The thinking can be continuous in the brain or re-induced by revision. Therefore, learning anything STRENGTHENS the connections; not increase in neuron no.

I can't help you with any Scientific Paper. The image was taken from a Textbook.

Not the answer you're looking for? Browse other questions tagged neuroscience neuroanatomy neurophysiology learning or ask your own question.

22
Why does regular exercise increase brain volume?
4
Effects of exercise on the brain
10
How does the brain avoid feedback loops?
9
Is lumosity.com based on science?
6
How does the brain recall information?
18
The human brain in numbers I: neurons
3
Is neurogenesis essencial for learning?
0
How does a neuron know to which one of the next neurons to pass the signal