Someone asked this in my class and my instructor wasn't sure in her answer, doesn't anyone know what happens in protein synthesis if a mutation causes mRNA to not possess a stop codon? Would the protein eventually stop? Would it keep coding into the poly-A chain and insert a bunch of phenylalanine?

No, this will not happen. mRNAs are inspected in the nucleus before they are exported into the cytoplasm (at least in eukaryotes), where transcription and translation don't happen at the same place. This ensures that no mRNAs without stop codons or premature stop codons are exported. This phenomenon is called "mRNA surveillance". mRNAs that do not pass this quality check, are degraded. See the Wiki reference for some basic information and the references below for more.

Yes you are correct. These mRNAs, that lack stop codon will cause translation to continue into the poly-A tail (it will result in addition of lysines not phenylalanine). Since no stop codon is present, the ribosome remains attached to the mRNA. Under these circumstances, a pathway known as non-stop decay is activated. 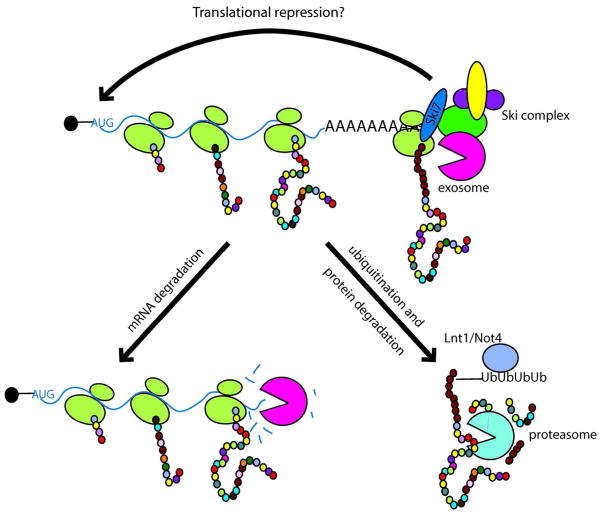 In prokaryotes too, the non-stop mutations cause the ribosome to run through the stop codon and to eventually stall. However, there are no poly-A tails and ribsosome recovery pathway is different from that of eukaryotes. An RNA called tmRNA (a hybrid of tRNA and mRNA) binds to the the A-site using its tRNA-like domain. Then the translation proceeds through the mRNA domain of tmRNA (this is called trans-translation) which causes an addition of a peptide tag (that acts like a degradation signal) to the stalled polypeptide and finally leads to ribosome release when the stop codon is reached. 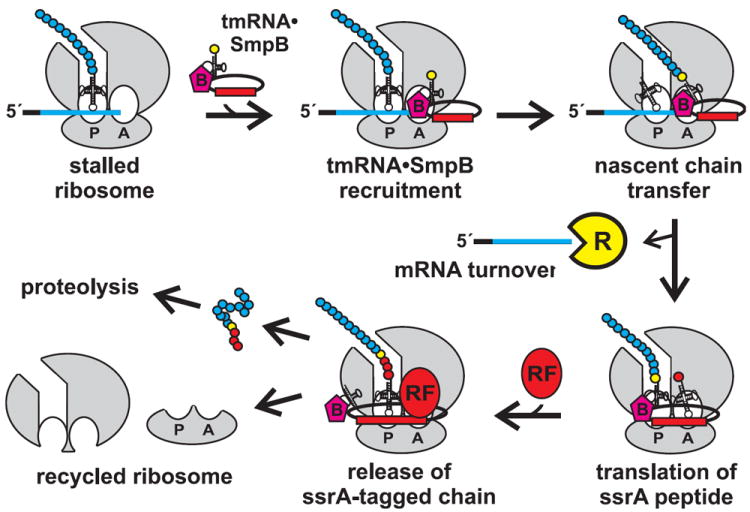 However, as WYSIWYG mentions, in the absence of alternative in-frame stop codon, mRNAs would be degraded. It is also called none-stop decay(2). I am not sure that this phrase gets popularity though.

Not the answer you're looking for? Browse other questions tagged molecular-biology rna transcription translation mrna or ask your own question.

12
Why is AUG the initiation codon?
2
Orientations of codon and anticodon
3
Mutation in pre-mRNA sequence
6
Why is the DNA codon table "equal" to the RNA codon table
3
What physical force attracts the anti-codon on tRNA to the codon on mRNA during translation?
4
Stop codons and exons?
1
What is the spacing between stop codon and transcription terminator?
1
Why are there three stop codons but only one start codon?
2
Relationship between the ambiguity (wobble) at codon position 3 in elongation and codon position 1 in initiation