Why is most tissue cellular?

Most tissue is comprised of cells. Why? It would seem inefficient to have so many individual nucleus, membranes, etc.?

Another way to ask my question: Do the cellular organelles directly contribute to the tissue and organ's function? Or are they just there to maintain the cell itself?

The above is my hypothesis. Is it correct? Fix, revise, or replace it with something better!

Since cells are the origin of every life, any tissue must at least be based on cells. Some tissue matter is outside the cells (plant cell walls), some apparently non-cellular tissue is really a bloated organelle. Both happens. As to your theses,

So, yes, you can differentiate between functions belonging to whole cells, cell organelles, or extracellular material. And there is no reason to narrow this question to humans.

Biological tissue by definition is tied to cellularity. To start this post, it might be useful to include important definitions:

A definition from wikipedia:

Tissue is a cellular organizational level intermediate between cells and a complete organism. A tissue is an ensemble of similar cells and from the same origin, that together carry out a specific function

The ECM or extracellular matrix, as the name suggest is a matrix.

WP: In biology, matrix (plural: matrices) is the material (or tissue) between animal or plant cells, in which more specialized structures are embedded, and a specific part of the mitochondrion that is the site of oxidation of organic molecules. The internal structure of connective tissues is an extracellular matrix.

Lastly,in chemistry, matrix generally refers to any chemical species which is not of direct immediate regard to the context of the observer (e.g. a chemist), but may or may not have significant effect on the chemistry or chemical environment in question.

Do the cellular organelles directly contribute to the tissue and organ's function?

No, they do not directly contribute to the tissue and organ's function but organelles contribute indirectly:

There is a hierarchy of structure: Everything is composed of smaller things and is a part of something larger. The character of structures with different scale changes according to the interplay of various physical forces. Quantum phenomena control the small scales, while gravity dominates on large scales, and both come into play at the beginning of the universe.

(Source: The Little Book of the Big Bang: A Cosmic Primer, pg 6 By Craig J. Hogan).

Mathematically the matter of hierarchies in science is tractable through renormalization. That isn't directly relatable to (structural) biology, but theoretical scientists have applied it.

Or are they just there to maintain the cell itself?

Out of necessity, the cell's organelles take part in the function of the cell, yes. The reason is that the organelles are enclosed by the cell and as such all prerequisites for sourcing energy are "enclosed by one additional level" as well. That being said, the organelles must maintain themselves, structurally (referred to as turnover) and information-wise. Information may not always be as accessible as through a designated external information carrier molecule, but may be a molecules properties or even another's molecules properties, serving for instance as a "nucleation template".

Thus, the word just in your question is not applicable.

Lastly, I would like to give you a few pointers related to cellularity and the question of "why" in a context of evolution.

Cellularity may be a universal restriction that follows from the laws of thermodynamics. These laws are by consensus equally valid anywhere in the physically tractable universe.
To do any work you need to have a gradient of a physical property, which is relatable to an interconvertable form of energy. To do work in an open environment in a sustainable manner over a long-term period, it is good to have insulation.

On this planet, inhabited by carbon-based lifeforms with evolution being confined to immediate (geo)chemistry**, that meant the use of lipids. Conveniently, lipids form micelles through intermolecular self-organization, in order to allow the system to reach a mimimum free energy state.
Chemical systems with say ions too spontanously assemble given favorable energetic conditions,- all you have to do is let table-salt water evaporate, yielding you little salt-cubes which even shed a bit of insight into the underlying makeup of the crystal's unit cell. But the energies of bonds that make up the insulation layer must be in a reasonable vicinity of the local thermal energy (k*T), where k is the Boltzmann constant, and T the temperature in Kelvin.

Thus, chemical species where the weak London forces outweigh any other intermolecular forces, is ideal for self-assembly of an insulation layer in a biological context. It is not the only solution that evolved. But the insulation layer crucially determines your abilities and interactions as an unicellular or multicellular organism in the tempo-spatial regime. (How large can you get? How fast can you hunt? How fast can you bud something off or engulf? How flexible are you towards shifts in your environment? Those things...) 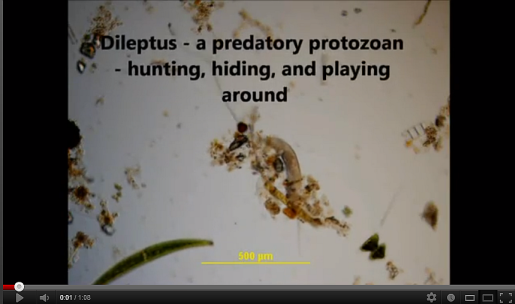 (Dileptus - a predatory protozoan - hunting, hiding, and playing around)

Self-organization can be observed across many hierarchies, serving the minimization (or optimization) of one or several properties.

A lipid membrane is ideal on a planet whose surface is covered by an extremely polar molecule. Insulation-wise lipids are impermeable to ions to allow the formation of an membrane potential. As electrical insulators lipids are excellent thermal insulators, locally confining electrons, and finally at providing mechanical insulation. Additionally lipids can serve as fuel, nutrients, signalling molecules, and many other tasks - which really just follows from or less local molecular evolution.

No-one can conclusively tell you what any given organelle is for (yet).

But science has furnished a comprehensive picture, by looking at the molecules that make up the organelle and tracing it back to genes to let scientists marvel at an organelles function from a bioinformatical perspective. What greatly helps the exploration of organelle function are many high-resolving imaging techniques, with a plethora of labeling techniques. This array of labeling methods was amassed over the course of a century. Recently imaging equipment has seen a rapid increase of better resolutions in the time domain, which is very important as each level of hierarchy has its own sort of "time-signature" - which is of course strongly influence by the masses (or inertial forces) involved.

The entire picture of organelle function is however subject to a major revision-cycle with the ongoing efforts to map out entire cells at an atomic level, with large scale preparations already underway.

This post isn't thoroughly sourced, and much of it is only a layman's perspective. Consider this only as a starting point.

Disclaimer: universe-review.ca has been around for almost a decade, despite an unclear author backing this project- for obvious copyright reasons of the textbook contents. it is scientifically sound.

***Immediate [geo]chemistry* would exclude anything from say Alpha Centauri, but not for instance Kiuper belt objects that may have had a significant role in the composition of earth's geochemistry. This subject is so far outside my field, I cannot give you any better information.

42
Why Is Most Life Symmetrical Externally But Not Internally?
0
cellular respiration
3
Dinuclei cellular mechanism
3
Does the cellular response to every receptor work the same way?
1
Why does the amount of adipose tissue contribute the most to the total body water amount in humans?
0
Tissue fluid water potential
2
Why is xylem a tissue and not an organ?
2
3D Cellular Model
0
Name/term for mechanisms by wich the relative size/number of cells of some tissue/organ are preserved