Does the anatomy of our hand result in (computer) mouse-accuracy that varies by direction of movement?

First off, I apologize if this isn't the right stackexchange sub-site for asking thsi question. I was torn as to where I should post this question: it could plausibly belong in Biology, User Experience or even Arqade. However, given the root of my question has to do with the "wiring" of the human hand, I elected to post it here.

Description of mouse grip:
In making the above assumptions, I assume a fingertip-grip style of the mouse (as opposed to the claw and palm grips). The (corner of the) wrist rests on the table and acts as a pivot for allowing side-to-side motion (i.e., horizontal motion of the mouse cursor). Meanwhile, flexing/extending the fingers allows for pulling/pushing the mouse away from us, (i.e., vertical motion of the cursor). The main (admittedly unscientific) reason behind my hypothesis is that vertical movement of the mouse cursor uses similar finger motions as those used for hand-writing (which is, after all, a highly precise activity).

(I understand that my question makes the assumption that we are capable of more precise movement with certain muscles of our body than we are with others - please let me know if that's a flawed assumption.)

Why do I care about this?:
If my hypothesis is correct, there would be implications on mouse settings (namely, horizontal and vertical DPI*) that are conducive to both high accuracy and speed. The key issue is that if we keep our wrist in place (i.e., no sliding/lifting of our pivot point) - then we're able to move the mouse a greater distance side-to-side (i.e., horizontal motion of cursor) than we're able to move it toward/away from us (i.e., vertical motion of cursor). However, if there is evidence to support my hypothesis, than an appropriate adjustment (which wouldn't result in a loss of accuracy) would be to have a slightly higher vertical DPI than horizontal DPI.

*DPI = dots (i.e., pixels per inch). For example, I have a resolution of 1366x768 (which is in units of dots or pixels) and a 600 dpi mouse, which means that my (physical) mouse needs to be moved ~2.3 inches (1366 divided by 600) in order for the mouse cursor to move the full horizontal distance of my monitor. To put it simply, lower DPI results in higher accuracy but it is preferable for our wrist to remain in-place in the interest of speed.

Assuming the case where you move a mouse left and right with the wrist and up and down with the fingers, then yes, finger movements are more precise. The fingers and facial musculature are body parts with the most exquisite fine motor-control. The wrist, on the other hand, probably less so. The wrist is definitely involved in fine motor skills such as writing, but the fingers even more so.

I wasn't able to find a good reference about the level of precision for different body parts at the behavioral level. I can, however, approach the question from a neurophysiological point of view. The amount of motor control available for different body parts can be visualized by means of a motor homunculus. The motor homunculus shows how many neurons are available in the cortex for a given body part. The larger the cortical surface dedicated to a body part, the larger the corresponding body part is presented in the homunculus (Fig. 1). 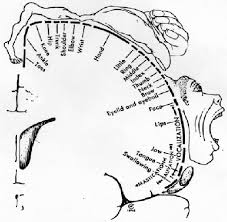 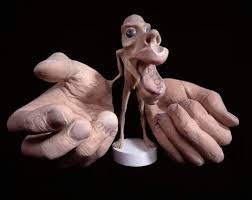 Fig. 1. Homunculus drawn on the motor cortex (left) and the homunculus presented as a figurine (right). Sources: Conference on Human factors (1997) and Autism Index, respectively.

The fingers have a huge amount of motor cortex dedicated to them compared to the wrist. There are a lot of 'buts' to add, most notably the larger number of muscles in the fingers versus the wrist, which explains part of the difference. Nonetheless, the homunculus does show the relative functional importance of the fingers in motor processing power of the brain, while the wrist is virtually invisible on the homunculus (Fig. 1, left panel).

Lastly, you seem to be mixing up 'distance' and 'precision' in your question. While the wrist may cover a greater distance, it is not because of this that the precision is smaller. The fingers have more neuronal processing power behind them and can be exquisitely fine tuned. In other words, the precision is not determined by the dynamic range (distance), but by the processing power dedicated to the motor function.

As a side note, because of RSI, it is recommendable to use gross arm movements instead of fine wrist and finger movements.

Not the answer you're looking for? Browse other questions tagged human-anatomy movement or ask your own question.

8
Is it the sphincter that flexes when a human pushes a bowel movement?
3
Do people of the same height walk at the same speed?
6
Does the human hand have 27 degrees of freedom?
1
The alignment of fingers in our hand
2
brain and fingers movement theorie
1
Does a full tear of the gluteus minimus tendon result in a long-lasting inflammatory response?
0
Can a hinge joint technically allow rotatory motion?