Hodgin-Huxley model for a single neuron

I am viewing (through edX ) an introduction course to computational neuroscience. In the second lecture, the Hodgin-Huxley model is considered. I am going over some of the questions and have encountered a problem with one of them (a picture of the exercise is attached below). I have a strong background in mathematics, but my background in biology is yet very poor. I am having a hard time connecting the biology to the math. Can anyone help with this question: 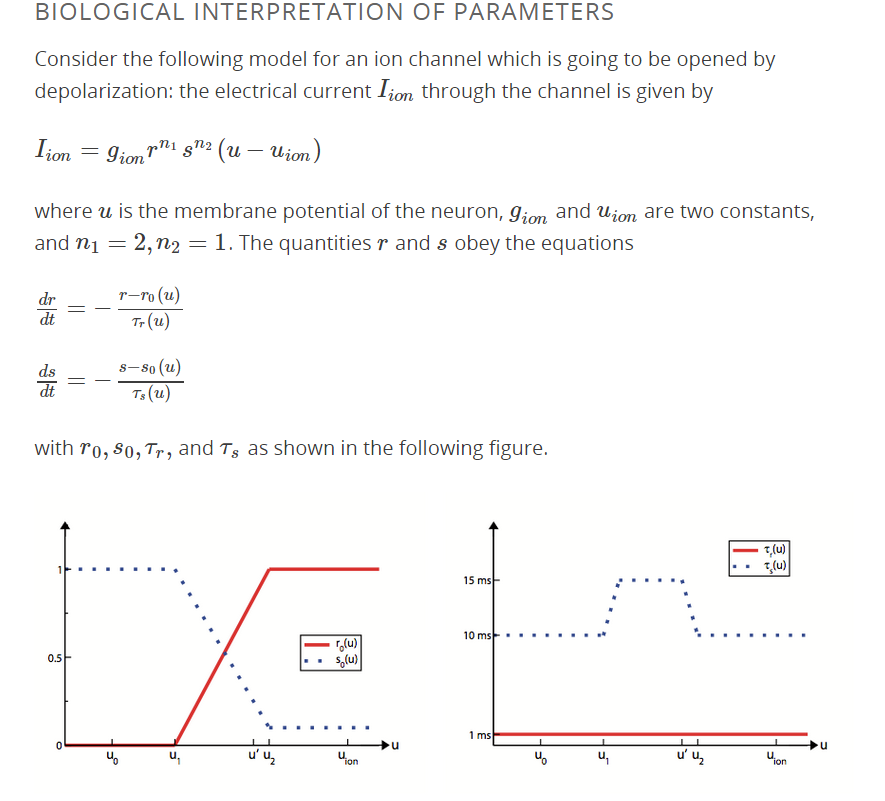 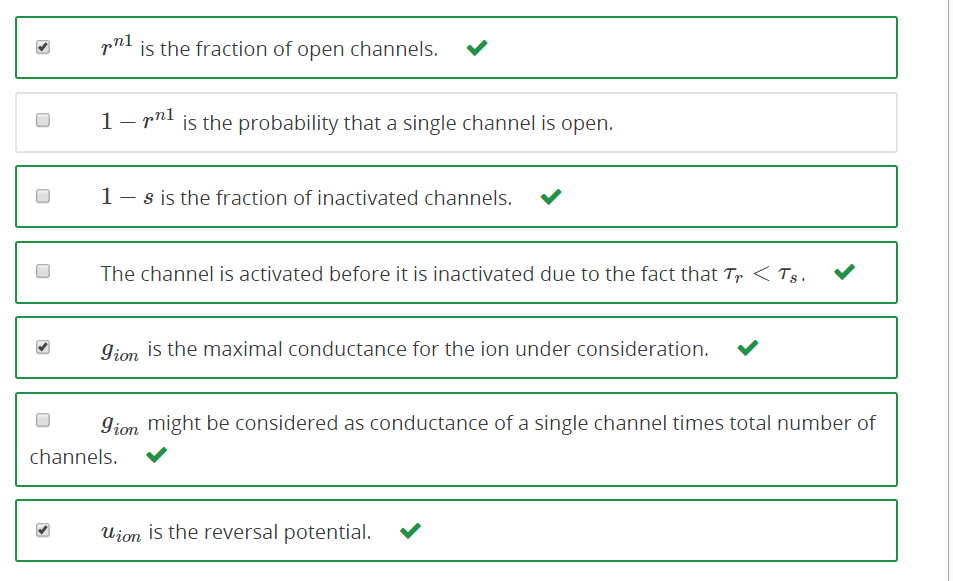 Since you didn't get the right answer to #6, let's review the basis for this model.

The basis of the model is precisely the statement in #6: an individual channel has a defined conductance when it is conducting, and if all of them are conducting then the total conductance is the single-channel conductance times the number of channels (conductances in parallel add).

Confusion comes from the fact that, in the terminology used here, an "open" channel is not necessarily conducting. The probability that a single channel is conducting is the product $r^{n_1}s^{n_2}$.

$r^{n_1}$ describes the "activation" process, while $s^{n_2}$ describes the "inactivation" process. These are two separate processes, with the activation process now known to be driven by voltage-dependent changes in the configuration of transmembrane domains of the channel protein, while the inactivation process is a charged part of the protein inside the cell that more slowly moves to block the channel when the cell is depolarized. See this summary by Clay Armstrong, who contributed much to our understanding of these processes.

The way this is modeled is that $s=1$ means no inactivation, while $s=0$ means fully inactivated. So that covers question 3. This is in contrast to the activation process, in which $r=1$ is full activation.

Question 4 might be a bit misleading as there may be a hidden assumption that you are starting from being at potential $u_0$ for a long-enough time and then increasing $u$ suddenly (which is how action potentials normally are generated). In that case your understanding of differential equations should make it clear that $\tau_r$ and $\tau_s$ are the time constants for the responses of the $r$ and $s$ processes to a change in $u$. The process with a shorter time constant responds more quickly, so activation precedes inactivation (on the average). The different powers associated with the $r$ and $s$ processes ($n_1,n_2$) might confuse things a bit, but try running this model and you should be convinced.

This might seem convoluted at first, but Hodgkin and Huxley worked out this model based solely on their electophysiological studies (with help from Bernard Katz). It's amazing how this model's postulates of multiple single channels and separate activation and inactivation processes have been so well verified at the molecular level over the past decades.

Not the answer you're looking for? Browse other questions tagged neuroscience homework neurophysiology computational-model or ask your own question.

10
How is membrane capacitance related to the increased speed of saltatory conduction?
2
Hodgin-Huxley model for a single neuron - continuation