Many instances of this worm-like creature were found in a water system for a mountain cabin in the Sierra Nevada mountains of the US, in late June / early July. The water system collects water from an enclosed spring. Can you help identify this creature?

Can you help us identify this creature? Even just possible families of creatures or general categories would be helpful for us.

I am not too sure but this looks like Polycelis sierrensis.

Though it is apparent that the worm in your pictures is a tricladid planarian, I was not too sure about the species and the geographical distribution.

However, from the Smithsonian list of freshwater planarians in North America, I deduced that this should be Polycelis sierrensis which is found in California and Nevada (Kenk ,1973).

The EOL page on this species also concurs with the geographical distribution. Moreover, the shape and dimensions of the worm, as described in EOL, matches with that of the ones you have got.

I could not find a picture of P. sierrensis but this is how a general Polycelis looks like: 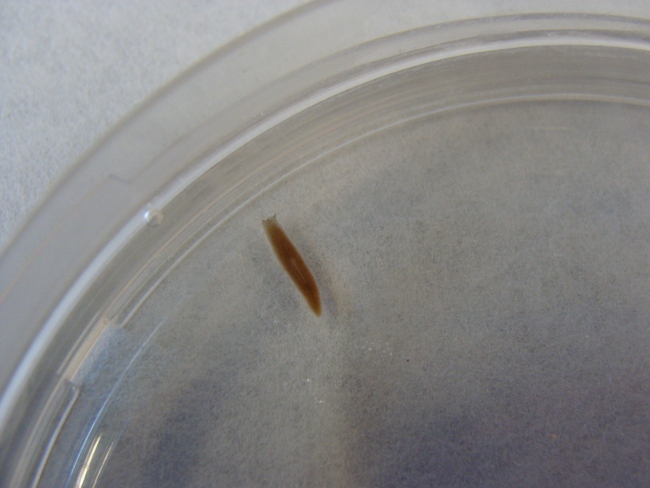 The overall shape appears to match that of a flatworm or planarian, but those don't have eyestalks. Also, in the images you posted, none of the worms appear to have the characteristic eyespots of a flatworm, although they DO look planarian-like in some photos:

If they didn't look so thin, I'd say they were common garden slugs. We get them all the time down in Southeast Texas, and they're attracted to humid areas, especially wetness. They usually have thicker bodies, though:

I've never put salt on a planarian before, but the behavior you describe is exactly what happens when a common slug hits salt. They curl up into what looks like a wad of gum, then shrivel up into a blackened husk. On the other hand, slugs are definitely NOT mountainous creatures. And they're definitely NOT leeches, which we also get down in Southeast Texas.

Based on your location and the images, you're probably looking at some sort of freshwater planarian. They're most likely in the source spring itself.

Their capacity to elongate / contract and their two head lobes make me think they are Planarians.

The two points on their heads must be their eyes: https://en.wikipedia.org/wiki/Simple_eye_in_invertebrates#Ocelli_or_eye_spots

15
Identify ~6-7mm long green creature
3
Black/dark-red smooth West African worm, full of red blood
7
Is this a saltwater millipede?
6
What is this worm or larva I found in my walls
23
What are these bladder snail parasites?
6
What are these tiny creatures swimming around my aquarium?
0
Can someone identify this worm?