How to make a fake auditory signal?

My question is about making fake auditory signals. The ear collects sounds from the environment, which are transformed into a neural signal by the hair cells in the inner ear. This signal is sent through the auditory nerve to the to brain, where it is decoded into a hearing sensation.

Devices that bypass the hair cells in the inner ear and directly stimulate the auditory nerve are called cochlear implants. Cochlear implants are used to treat deafness caused by the loss of hair cells in the cochlea. The hair cells are the sensory cells that convert sound vibrations into electric neural signals (Purves et al., 2001). With state-of-the-art devices, the better performing implant wearers are able to talk over the phone(!) An exclamation mark is in place, because it means they can understand the spoken word without the need for lip reading or sign language. Hence, cochlear implants are the answer to your question, but they definitely are not designed to generate fake signals. Instead, they are used as an effective treatment for deafness and are capable of transmitting meaningful speech information.

Cochlear prosthetics consist of an array of typically 20-24 electrodes that are inserted in the scala tympani of the cochlea. The inner ear is tonotopically organized, which means that high frequencies are coded in the base of the cochlea, while low frequencies are encoded in the tip. Hence, each electrode stimulates a separate frequency band (Fig. 1). By using a microphone and sending the acoustic signal through a filter bank, a number of auditory frequency bands can be obtained equal to the number of electrodes in the implant. After this speech processing step, the acoustic frequency bands are converted into trains of biphasic pulses. These pulse trains are sent to the electrodes in the cochlea, which then activate the auditory nerve directly, effectively replacing the degenerated hair cells in the inner ear (Stronks, 2010). 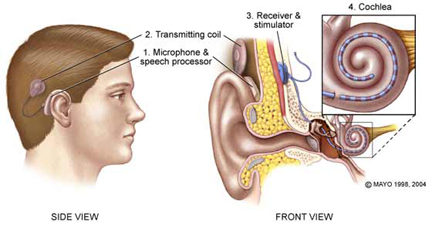 As @AliceD mentioned, cochlear implant is one of the earliest achievements of neural engineering. However, there are orders of magnitude more inner hair cells (IHC) and even more auditory nerve fibers (AN) in human cochlear than the current cochlear implants offer electrodes. If you are interested in a more detailed model of IHC to AN signal transmission, there are tons of research, for example:

Not the answer you're looking for? Browse other questions tagged neuroscience neurophysiology hearing electrical-stimulation biomedical-engineering or ask your own question.

8
What does pain look like in wave form?
14
What is the human ear's temporal resolution?
3
What determines the pathway of a neurological signal?
6
What would happen if you "rewired" your eyes with your nose?
4
Where in the nervous system are synapses chemical, and where are they electrical?
2
What is the signal conversion from hair cells to cochlear nerve cells?
3
Can a brain process auditory signals at 18 weeks of human development?
6
Are there gaps in what our ears can hear?
3
What role does the eardrum and ossicles play in hearing, versus cilia?