Are there any such studies?

You can answer this question for yourself using the modMine data warehouse for modENCODE datasets. All you need is a list of female-specific genes (using your identifier of choice, although FlyBase FBGxxxxxxxx are the simplest). You can use their list tools to upload your own list of identifiers, and then there are a bunch of widgets that will tell you things like GO Term enrichment, PubMed references, and one is a histogram plot showing the chromosomal distribution of your genes, and a second histogram showing the "expected" distribution. Access to many modENCODE sites can be found at www.modencode.org

Okay, I went and did this myself. modMine was quite slow, but fortunately the intermine server at FlyMine is working fine. I downloaded Supplemental table 25 from Graveley et al., Nature, 2011 and cut and pasted all of the "Female Biased" IDs for those rows that had FlyBase Gene Identifiers. This figure shows the chromosomal distribution of the 928 genes: 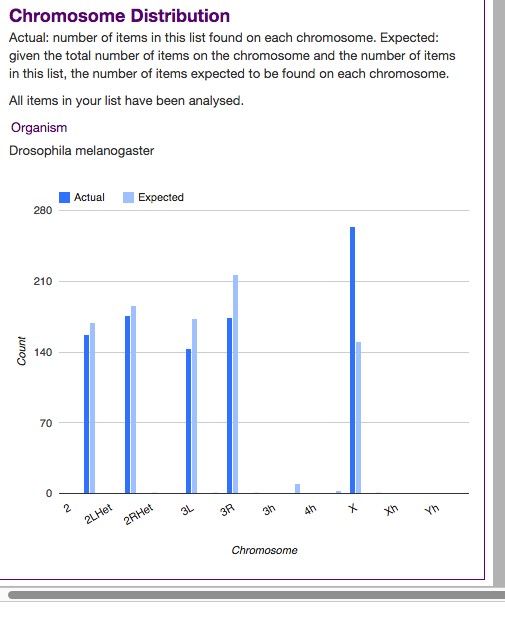 The Labels on the X-axis do not line up properly (for some reason), so here is a table with the Chromosome names and the counts:

Not the answer you're looking for? Browse other questions tagged gene-expression genomics sex-chromosome sexual-dimorphism or ask your own question.