Why did Opabinia have 5 eyes?

I recently read about a fossil called Opabinia. What intrigues me is that it had five eyes. I was under the impression that most features, such as eyes, ears and legs are always even-numbered, i.e., 2, 4, 6 etc. Why did Opabinia have 5 eyes?

Short answer
The number of eyes are not always even-numbered. In fact, many present-day lower vertebrates feature an uneven number of eyes.

Background
Eyes can be generally defined as photosensitive organs. Besides the regular paired eyes, lower vertebrates such as fish, amphibians and reptiles feature an unpaired (single) brain structure called the pineal gland, or parietal eye. It is primarily a photoreceptor organ, and its electrical activity changes in response to environmental lighting (Fig. 1). The pineal does not mediate vision, and it is mainly involved in regulation of circadian rhythms (Deguchi, 1981).

Hence, many lower vertebrates can be considered to have 3 eyes. In fact, the blind cavefish Astyanax mexicanus undergoes bilateral eye degeneration during embryonic development. Despite the absence of light in the cave environment, cavefish have retained a structurally intact pineal eye. Hence, cavefish can be said to have a single eye (Yoshizawa & Jeffery, 2008). 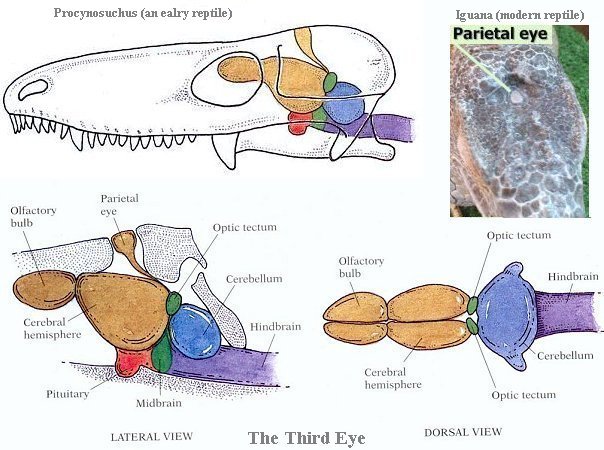 Not the answer you're looking for? Browse other questions tagged eyes anatomy or ask your own question.

1
Structure of adenoids
13
Is it possible for two brown-eyed parents to have blue-eyed child?
3
How come all my family have brown eyes and I have blue eyes?
3
How can paleontologists identify morphologically different fossils as members of the same species?
1
Why do eyes change colour after death?
0
Is the backward positioning of photoreceptors bad design?