Why is dopamine or a dopamine-receptor agonist not pumped into the brain of Parkinson patients?

I am aware that dopamine cannot cross the blood-brain barrier, but can't it be pumped inside the cerebrospinal fluid via some permanent tube implant? Wouldn't Parkinson patients chose that over succumbing to the disease? Why hasn't it even been ever tried?

Levo-Dopa is used as a first-line treatment of Parkinson's disease. Unlike dopamine, L-Dopa is able to cross the blood-brain barrier. There it is converted into dopamine. To prevent premature breakdown in the gastro-intestinal and circulatory system after oral intake, carbidopa can be co-administered. Also MAO-B inhibitors and COMT inhibitors can be applied to prevent breakdown of L-Dopa in the brain. Oral medication is preferable over invasive intracranial infusion of medication. 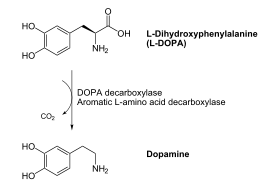 Dopamine agonists are also in use. Unlike L-Dopa, dopamine agonists are not converted into dopamine. Instead, they mimic dopamine effects in your brain. They aren't as effective as L-Dopa, but they last longer and may be used alongside L-Dopa to smooth the sometimes off-and-on effect.

Parkinson's disease is not fatal, but it can reduce longevity. The disease progresses more quickly in older patients, and may lead to severe incapacity within 10 - 20 years. Older patients also tend to have muscle freezing and greater declines in mental function and daily functioning than younger people. L-Dopa treatment in the long run causes adverse effects, such as dyskinesias, toxicity, or loss of efficacy (Marsden, 1994).

In theory, you could inject dopamine directly into the cells of the brain, inside the barrier. But, the dopamine wouldn't diffuse far, and so wouldn't affect anything except for a very small area (millimeters?) around the injection point. So, to get an even distribution of dopamine, you'd need to inject at thousands (millions? more?) of points throughout the brain, and do it repeatedly.

And even with that, there's no guarantee that directly applying dopamine to the brain cells would actually help. In fact, bathing nerve cells in a neurotransmitter seems like a great way to mess up their signal transmission system.

FDA recently approved the duodenal levodopa infusion pump. Idea is to wear the pump 18 hours a day, removing it at night. This allows for a small dose of levodopa to be injected through the day.

I can not yet add comments, only new post.

@shortage_radeon The leading causes of death, among patients with Parkinson's, were pneumonia and bronchitis. Swallowing becomes more difficult with time, leading to aspirated liquids into the lungs. While a feeding tube can assist, the most effective is working with a Speech Therapist on keeping those muscles active.

Thankfully exercise and diet have huge benefits for those of us with Parkinson's.

Not the answer you're looking for? Browse other questions tagged pharmacology brain dopamine or ask your own question.

35
Why do the two hemispheres of the brain control the opposite sides of the body?
8
Why did the Brain develop in the front in most organisms?
35
Why is the brain white?
3
Why is the internal capsule dark in this transverse section of the brain?
5
How are sequential patterns grouped into meaningful objects in the brain?
4
Why does excess dopamine activity in the pleasure centers results in less pleasure in schizophrenics?
2
How long does it take for a blocked dopamine receptor to be broken down by the body?