why do marine organisms orient with their bellies facing downwards?

why do marine organisms orient with their bellies facing downwards (like most creatures) given that they have relatively fewer constraints on their orientations than land or air organisms?

I'll address fish here. It's hard to tell which way is up with many sea-dwelling invertebrates, e.g. sea cucumbers. Sea urchins often are oriented "sideways" if you count their mouths as "down".

All animals normally orient themselves in the most advantageous manner dependent on their situation. Probably the most important determiners are field of vision and the inner ears, which work much like those of humans (who walk upright even if blind.) Unlike land vertebrates, the ear of fish is thought to have evolved as a vestibular organ for balance and orientation in space rather than as an auditory organ. Fish (and other sea creatures) also have other sensory apparatus which orient them, such as lateral lines.

Pipe fish swim in a horizontal manner like other fish, but rest vertically, swaying with the sea grass around it. Flatfish start "normal" but as the eye shifts position to the other side of the head, it will assume a bottom dwelling "sideways" position, with a contorted mouth and a fin squashed against the sand. 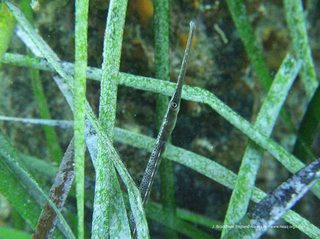 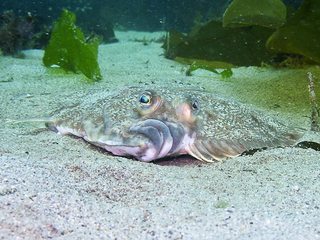 “Flatfish are the most asymmetrically-shaped vertebrate to ever live on earth,” says Alexander Schreiber, a flatfish expert at St. Lawrence University. “It sounds likes a really dramatic thing to say, but as far as vertebrates go, it’s true.”

Apparently flatfish brains start to receive stronger signals from one inner ear than the other.

Two organs — the eyes and inner ears — work together to keep typical fish in an upright swimming posture... If the eyes are not receiving the same amount of light on each retina... retinal neurons trigger the brain to tilt the entire animal and set it straight. ...As a fish’s vertical orientation in water changes, the brain combines information from the eyes and ears to figure out which way is up. ...[f]latfish larvae that are deliberately blinded adopt a sideways swimming posture.

When snorkeling, it is not at all uncommon to see any of a number of fish flip to their sides side to get a good look at you (floating above) with one eye, as opposed to maneuvering itself to face you. I imaging they assess the threat; since I wasn't a threat, they would just reorient themselves normally and go about their business.

Whatever aids survival within the parameters they are confined to (were born with) in that niche will be what you see.

Not the answer you're looking for? Browse other questions tagged evolution ichthyology or ask your own question.

6
Why has our nose evolved with the nostrils facing down?
20
How and why did mammals go back to the oceans?
0
How do fish communicate?
5
Are there any animals that get smaller as a normal part of their life cycle?
4
If life began at sea, why organisms are less salty than the sea?