The Lotka–Volterra equations, also known as the predator–prey equations, are a pair of first-order, non-linear, differential equations frequently used to describe the dynamics of biological systems in which two species interact, one as a predator and the other as prey. The populations change through time according to the pair of equations:

This looks very similar to how Insulin and Glucose interact with each other in the body. 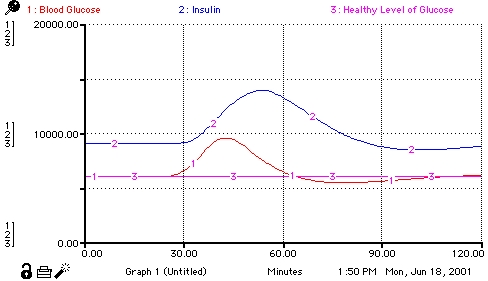 Glucose uptake release insulin and glucagon offsets the effect of insulin through glycogenesis.

Can the Glucose-Insulin dynamic be described as Lotka Volterra?

Is the standard Lotka-Volterra (LV) model an exact fit for insulin-glucose (IG) dynamics? No. Can a similar model built on the same principles capture most of the essential features of the IG dynamics? Absolutely.

We can figure out how to change the LV equations to fit the IG dynamics by figuring out how our assumptions have changed. Like Daan mentioned, neither insulin nor glucose undergo self-reproduction. So we'll drop those terms from the equation, and we'll represent an influx of glucose (as from, say, a meal) as a simple time-dependent linear spike. Your rate equations will now look like:

Simulation of insulin-glucose dynamics using the above LV model

I ran a simulation of the above model in Matlab, and here's what it looks like: 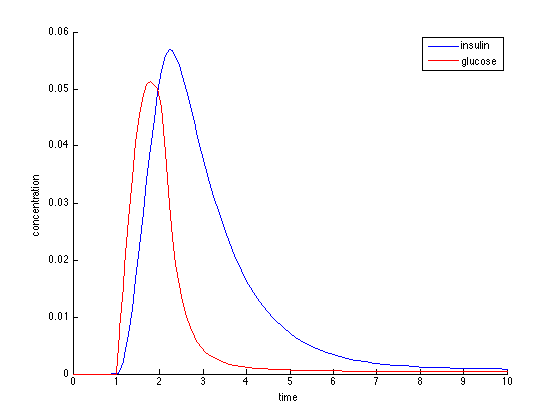 The basic features of the insulin-glucose dynamics from the example graph the OP posted are present. Just like in the real system, first the glucose spikes, then the insulin spikes after a short lag, then they both return to baseline.

With some small improvements, the LV model can capture the dynamics of the infamous "sugar crash" phenomenon

Now for the really cool part.

As can be seen on the OP's graph, glucose levels tend to fall somewhat below their baseline following a large glucose spike. This is the physiological basis for the sugar crash that people sometimes get a little while after eating something really sugary like a candy bar. Regardless of whether the psychological symptoms actually occur, the dip in glucose levels is a real thing.

In order for a model to be considered "good", it has to be able to capture these kinds of complex but important phenomena in their underlying systems. The glucose dip did not show up in my original LV model, so the question is, can the model be modified in a simple way so that it will capture the dip? Let's take another crack at it!

Again using Matlab, I ran a simulation of the "dip-enabled" LV model: 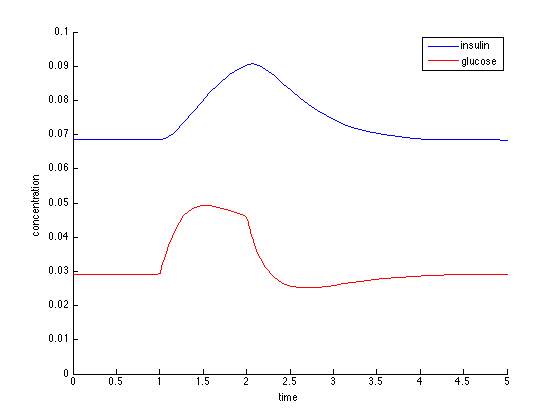 and this time the dip shows up.

-The term with the times in it is called an Iverson Bracket.

-You could make this model more physiologically relevant by using a more complex function for the glucose spike, but for simplicity's sake we'll stick with a linear function. A smoother function, like for example a Hill function, would probably help to reproduce your original graph of the IG dynamics.

Interpreting your question as "would the Lotka-Volterra predator-prey model be a good model for the glucose-insulin system?" my answer is "no". The predator-prey equations capture assumptions about how prey and predator interact with each other, and how they would fare on their own. These assumptions are not equivalent to any reasonable assumptions about the glucose-insulin system. The fact that both prey and predator population sizes as well as glucose and insulin concentrations oscillate is not enough to say the two systems may be modelled by the same equations. In fact, the oscillations in the figures you show are very different form each other.

Let us go through some of the assumptions of the Lotka-Volterra predator-prey model to see why most of them do not resemble anything related to the glucose-insulin system.

2) The population growth rate of the prey is reduced by a quantity proportional to the population sizes of both prey and predator. The underlying assumption is that prey and predator meet a rate proportional to their population densities and that a fraction of these encounters leads to the death of the prey. The assumption about the encounter rate is called the Law of Mass-Action, and applies well to chemical compounds in a liquid, like glucose and insulin. However, glucose and insulin do not interact directly, and it is not clear to me how realistic assumptions abut their interaction would work out.

The answer to these questions is, according to me, "no".

(On a side note: the Lotka-Volterra model is structurally unstable, meaning that slightest change in the assumptions would fundamentally alter the outcome of the model. One of these outcomes are neutrally stable predator-prey cycles, that is, cycles of which the amplitude and period depend on the initial population sizes. Changing the assumption that the prey population grows exponentially by including a term - $m \times x^2$ to the first equation changes the oscillations into damped oscillations so that the populations settle at a stable equilibrium.)

No, the Lotka-Volterra model is a description of predator-prey dynamics. Although in some respects over-simplifying it is well suited for educating population dynamics and basic research.

The physiology of carbohydrate homeostasis is different. Although, similar to population count in the Lotka-Volterra model, the elimination of both glucose and insulin depend on their respective concentrations (which represents a very basic form of autoregulation), their interdependence is different. Here, we have to consider distribution processes, receptor binding, enzyme kinetics etc.

Numerous mathematical and cybernetic models have attempted to describe glucose-insulin homeostasis. The following review articles provide a good overview of the topic:

There is an important difference in the dynamics of the 2 situations.

The Lotka-Volterra model undergoes repeated oscillations in predator and prey levels. Changes in one population affect the changes in the other population, and vice versa.

Not the answer you're looking for? Browse other questions tagged theoretical-biology literature glucose insulin or ask your own question.

8
Do blood glucose "spikes" contribute to insulin resistance, or is prolonged elevation required?
10
The replicator equation vs the Lotka-Volterra equation
3
Biological meaning of Lotka-Volterra Jacobian matrices
2
Why do some tissues have insulin-dependent glucose transporters and others not?
2
Activation of Glycogen Synthesis by Insulin - mechanism and cellular location?
3
Would intravenous insulin + glucose significantly accelerate glycogen synthesis?
1
Can monoclonal antibodies be used to transport insulin
2
Original Lotka–Volterra model
1
Confusion about Lotka_Volterra model for two competing species
5
On stochastic Lotka-Volterra predator-prey model