What would happen if brain neurons did not reduce their sensitivity to neurotransmitters after prolonged exposure?

From my understanding, neurons decrease their sensitivity to neurotransmitters by reducing the amount of receptors on the cell membrane in response to sustained neurotransmitter activity. One explanation I heard is that cells do that to protect themselves from damage.

This makes me ask - what kind of damage could be caused by sustained neurotransmitter activity in the brain, if cells did not reduce their sensitivity? Can a brain survive/thrive if neurons always had the same number of neurotransmitter receptors?

Short answer
As far as I am aware, neurotoxic effects of chronic excitatory stimulation are not prevented by receptor trafficking.

Background
I think the question assumes that 1) neural damage related to continuous activation (excitotoxicity) is preventable by 2) the dynamic regulation of receptor numbers on the neuronal membrane. As far as I can see, these two processes are unrelated.

Hence, it is the influx of toxic amounts of Ca2+ that induce cell death. Not much Ca2+ is needed to accomplish this. For example, a status epilepticus (a sustained epileptic seizure) can lead to hippocampal damage, due to persistent excitation and glutamate release (Meldrum, 1991). Epileptic seizures lasting longer than 5 minutes are regarded as dangerous in this sense and after 30 minutes they are potentially fatal (often not directly related to excitotoxicity though) (Cherian & Thomas, 2009). In this short time span regulation of cell-surface receptor densities are unlikely to play a substantial role. For example, serotonin-specific reuptake inhibitors need 2 weeks to lower the amount of 5HT1A receptors (Tylee & Wolters, 2009). 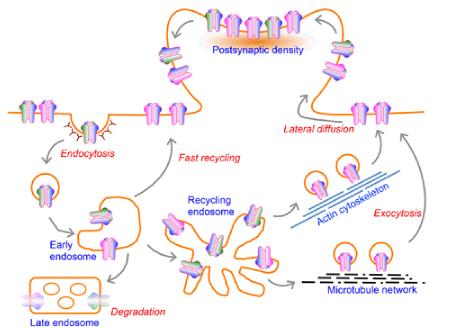 AMPA receptors are the principal receptors that mediate most of the fast excitatory synaptic transmission in the mammalian brain (Purves et al., 2001). The dynamic trafficking and proper synaptic targeting of AMPA receptors are crucial in determining the strength and plasticity of excitatory synaptic transmission. This dynamic regulation may also impact learning and memory processes. The process of receptor trafficking is, as far as I know, typically not associated with emergency rescue operations to prevent excitotoxicity. Nonetheless, these mechanisms, are essential to sustain an adaptable brain capable of learning, forgetting and restructuring itself.

In principle, many neurotransmitter receptors work as ion channels and the actual mechanism of signalling involves allowing the influx/efflux of calcium, potassium, magnesium, etc. A good example of this is the acetylcholine receptor. Presumably, if the cell retained the same number of receptors even in the presence of abundant ligands, the cell would flood with ions. Not only would this render the signalling pathway insensitive it may lead to survival issues for the cell/inappropriate cross-talk with other pathways.

That is at least how it should work in the models of neurotransmitter signalling I'm familiar with, it seems quite likely that a neuro lab somewhere has a cell, or animal model that can provide a real world answer.

Not the answer you're looking for? Browse other questions tagged human-biology neuroscience brain neurophysiology neurotransmitter or ask your own question.