Does your iris color have an effect on your vision?

I've always wondered if having different iris colors, (eye colors) may have any advantages or disadvantages on ones vision. Specifically regarding the effects of light.

Personally, I have troubles being out in the bright sun without sunglasses. My girlfriend on the other hand does not share this issue. Coincedentally my eyes are a light blue and hers are brown. After realizing this, I began to notice a trend when it comes to blue eyed people having this same issue.

So, on a bright day, does a person with blue eyes have a higher sensitivity to the light than their darker counterparts? Thank you.

The person with a lighter iris will have more straylight compared to person with brown iris: 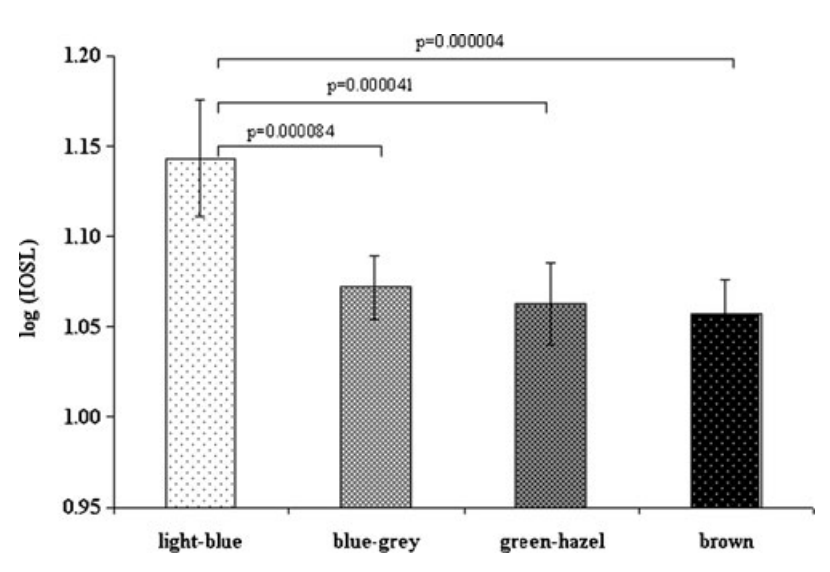 Persons with light-blue-colored eyes have significant higher IOSL (intraocular straylight) values than persons with darker-colored irises (blue-grey, green-hazel, and brown). Light-blue-colored eyes had 0.07 to 0.08 log units higher IOSL values, which is an increase by a factor of 1.2. In regard to CS (contrast sensitivity), subjects with light-blue iris color showed also lower CS values than subjects with other iris color.

Edit: The study concluded that in people with blue irises, IOSL was significantly higher. Although IOSL did not affect best-corrected visual acuity (e.g. visual function based on a standard letter chart test at the optometrist), it did affect contrast acuity, meaning that folks with blue eyes had more difficulty assessing contrast differences (e.g., telling apart two grays with a slightly different brightness).

Not the answer you're looking for? Browse other questions tagged eyes light iris or ask your own question.

1
Why does contracting the iris allow less intense light to go in?
1
What does ophthalmologist see in your eye?
2
Can someone who is color blind recover color vision by surgical means?
3
Does human eye lens have a magnification of its own?
7
Do color-blind people have more rod cells in their retinae than the normally sighted?