It is well known that if DNA occurs in the cytoplasm of eukaryotic cells, an immune response may be triggered through a myriad of DNA receptors and pathways as part of the immuno response. Yet, apparently the nuclear DNA does not induce any type of such response. Is it known why this happens? Is it just due to the fact that the nuclear DNA is immuno-privileged?

Microbial nucleic acids can be discriminated from self nucleic acids using various parameters, such as their sequence, their tertiary structure, their molecular modifications and their localization. In addition, mislocalized DNA and RNA can be an indicator of cellular damage and infection. [1]

Microbial nucleic acids are discriminated from self nucleic acids based on different parameters, such as their sequence, structure, molecular modifications and localization. On the other hand, mislocalized self nucleic acids — such as extranuclear DNA or extracellular RNA — can be recognized as DAMPs, probably because they are reliable indicators of cellular damage. [2]

Somewhat suspect is the similarity of those quotes; I only link to both reviews so as to include both in the references for further reading.

Distinguishing by sequence and structure are self-explanatory. Molecular modifications could include unmethylated CpG sites which are more common in bacterial and viral genomes and are recognized by TLR9. [3] Mislocalized DNA means any that is found outside the nucleus, which is a sign of damage or infection. Most of the well-studied nucleic-acid-recognizing PRRs are found outside the nucleus: TLRs are constrained to endosomes and the extracellular environment while RLRs are found in the cytoplasm. The as of yet identified DNA sensors like DAI also seem to localize to the cytoplasm. Extranuclear PRRs do not necessarily need to discriminate between endogenous and exogenous DNA: any that they sense is mislocalized. However, at least one dsDNA-recognizing PRR, IFI16, localizes to the nucleus as well as the cytoplasm, where it can recognize viral dsDNA. [4]

It has been assumed that cells distinguish viral from cellular DNA due to the former's presence in the cytosol. However, … Kerur et al. (2011) propose that the DNA genome of Kaposi's sarcoma-associated herpesvirus (KSHV) is recognized inside the nucleus by the DNA sensor IFI16, leading [to] inflammasome activation. [5]

IFI16 apparently distinguishes exogenous from endogenous DNA by its length. [6] 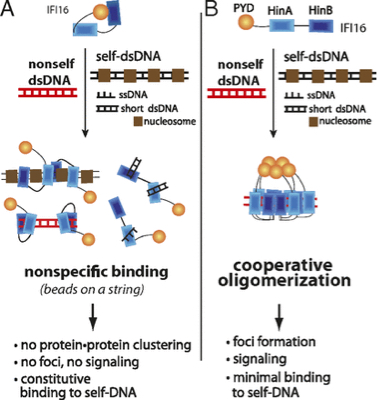 Endogenous DNA is present in vivo as chromatin and the amount of exposed linker DNA between histones is too short to promote the cooperative binding and oligomerization that IFI16 requires for signalling (B). An older model, where IFI16 binds independently, is also shown (A), but it suggests that IFI16 should bind self-DNA and doesn't fit with experimental results.

That is just one specific example of how a PRR can distinguish self from non-self. DNA sensors actually seem to be on the cutting edge of research into the innate immune system and, as such, the complete picture has yet to be determined.

Not the answer you're looking for? Browse other questions tagged molecular-biology dna immunity or ask your own question.

7
How do nuclear receptors locate each other to form a DNA loop?
3
Self pairing in DNA
1
Is the nuclear envelope present in G1 of interphase?
1
mRNA Transcription from Nuclear DNA
3
In the life-cycle of the HIV virus, how does the created DNA enter the nuclear membrane?
3
Can mitochondria with “depleted” mtDNA reproduce?
1
What's the difference between Phage DNA and Recombinant DNA
6
What do white blood cells do with FOREIGN white blood cells?