How does Bernoulli’s Principle apply to the cardiovascular system?

Below are graphs which illustrate the cross-sectional area, velocity, and fluid pressure through each vascular segment of the cardiovascular system. 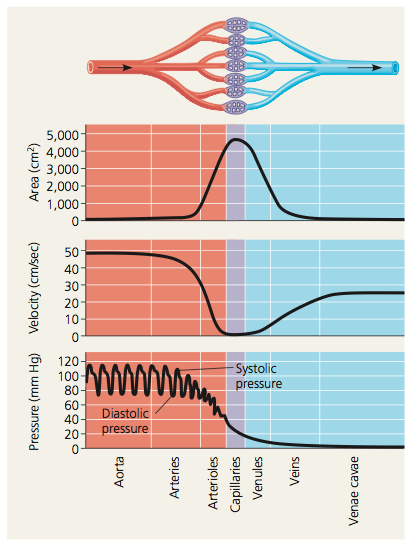 It makes sense that velocity and cross-sectional area should be inversely related graphically (by the equation of continuity, ($v_1A_1=v_2A_2$). However, Bernoulli’s principle states that where velocity is high, pressure is low, and vice versa. However, in the graph above, clearly pressure is decreasing as you move away from the aorta, regardless of velocity.

I can understand how the pressure in capillaries will be higher than those in venules, since a higher pressure in capillaries would accelerate the blood as it moves into the venules with a lesser total cross-sectional area. This agrees graphically, since, past the purple stripe, the pressure curve decreases as the velocity curve rises. Yet the mean arterial pressure in the aorta and arteries seems to violate the relationship between velocity and pressure stated in Bernoulli’s principle. What is there to make of this?

Bernoulli's principle can be a little tricky when applied to the cardiovascular system, but it still holds true across the entire system. You mention a good point that the relationship doesn't seem quite right at the aorta or arteries, because of the constant fluctuation of pressure between systolic and diastolic without a significant change in diameter of the vessel. Remember that this is due to the pulsatile flow of blood from the heart, and has nothing to do with Bernoulli's principle. If the flow was constant (i.e. not pulsatile) then the pressure would be constant as the diameter of the vessels is constant. As the diameter of the vessels begins to decrease the velocity would increase to maintain a constant value.

As you mention, Bernoulli's principle describes how the product of area and velocity of flow must be constant across a system. When the total surface area of the system increases, the pressure decreases as well as flow. It is important to remember that even though the capillaries are so small and individually high resistance (which you would think according to Bernoulli's principle should increase the velocity), you are effectively adding an innumerable number of these very small resistors in parallel (not in series) and the resistance overall (and subsequently pressure + flow) decreases greatly.

The parallel resistance stuff was difficult for me to grasp when I was a student, because it never seemed to make sense in my mind that the resistance significantly decreased when you added all these small capillaries. One of my physiology professors described it well when he said, "Think of adding resistance in parallel, in the way that capillary beds and other vessels are in the cardiovascular system, like giving the blood another place to go." If the blood has more places that it can go, then it's easier to see why resistance falls so much when you add a bunch of extra places for the blood to flow.

I think there are several things that keep Bernoulli's principle from being straightforwardly applied.

First, Bernoulli's principle would help us calculate the pressure exerted by the blood on the walls of the vessels, but that's not what blood pressure measures. Blood pressure measures the amount of force that has to be applied to stop the blood from flowing forward. There's some relationship between the two, but it's not clean.

So Bernoulli's principle does mean that blood is exerting more pressure on the surface of the arteries and arterioles than it is in the aorta. However, pressure is force per unit area, and there's much more area in the smaller vessels, so the pressure in any single vessel is less.

Not the answer you're looking for? Browse other questions tagged human-biology physiology cardiology hematology biophysics or ask your own question.