Driving force for speciation for millions of species today

I would like to know if speciation really occurs (trans-speciation). Have we had enough time for millions of species? A creationist argument is that the slow changes in traits in organisms, taking tens of thousands of years to yield a visible change in variation as evolution suggests, does eventually trap yourself in to a problem of "Time Riddle". You just don't have enormous enough time at hand for all these species to come into being. A quick average time calculation suggests that you should have a new species come into being every 15-20 yrs [just rough average time estimation suggests that in about 1 billion yrs ~50 million distinct species evolved]. Though I believe in evolution, I cant understand this part.

This answer is towards the question, what forces primarily drive evolution such that we can observe a million species today? which is what the user wanted answered.

To answer this question, we can start off at many places. So I wanted to start off at Kimura's neutral theory of evolution which encompasses both Natural selection and genetic drift. I wanted to start here because although it is true, it also brings to light a fundamental trait of phenotype which has been highlighted in this paper which suggests that mutation rate in a species as a whole is not very divergent, but the same rate varies by several magnitudes when comparing genes having lower rates in highly expressed genes and higher in lowly expressed ones.

This brings to light another feature of gene mutation. A very simplistic view is that gene products are perfect for their function, that is not the case (I need to find a proper reference for this, maybe someone can help me with that?). Gene products are never the most thermodynamically stable nor the best at performing their intended function, but rather they are positively selected for once a mutation produces a product that provides increased fitness to the organism.

Till now this answers two things:

So now let us come to the part about millions of species. If you followed me till now, you understood that based on different mutations changes will arise. I would now like to bring in the theory of Punctuated equilibrium which basically states that a species once developed remains nearly the same for it's geological history. Below is an interesting image from the wiki page. 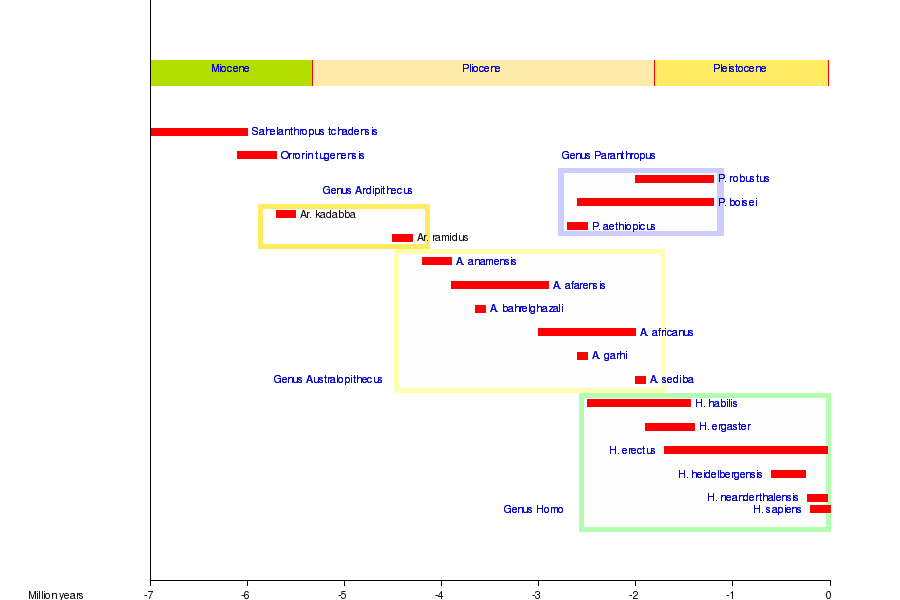 So according to this theory once a species has appeared, until it disappears it will remain largely the same. It will disappear does not mean the entire line will die off. Rather, it means a substantial part of will die off, allowing niche populations to colonise the now empty ecosystem. Or a change in climate may now allow a certain niche species to migrate out of their ecosystem to provide competition to the already existing species in the ecosystem and then to oust them from their place (look at yourself for example), the migratory pattern exhibited by homo sapiens during the end of the last ice age led to the removal of neanderthals from their ecosystem (this is very traditional and overly simplistic but mostly correct so I will not provide the complicated parts here).

This theory worked on the theory of geographical speciation which goes on to state that geographical changes may lead to population separation, which leads to the different species. This is because, in their own ecosystems they will be privy to very different environmental stresses such as climatic conditions, competition, predation, food availability and disease. So after a million years these two populations which were the same will now be very different.

So I think, I have provided a suitable answer to this question, because your view evolution as something very linear. Which it hardly is. There are many factors which guide it, and this is how today you can see millions of species. Another thing to note is that of the millions and millions of species identified on earth today, multicellular organisms represents a handful of crumbs from the pie. Most of it is actually micro-organisms (Anyone know the source for some exact numbers?)

Your math is wrong. Assume for simplicity that speciation is binary: that is, a speciation event divides one species into two. 50 million species is between 2^25 and 2^26. So producing that number of species in 3 billion years would require any lineage to speciate on the order of once per 120 million years.

Remember, as per comments above, that evolution works in parallel!

Another point to remember is that most of the species existing today are insects or microorganisms. Would we even notice the development of say a new species of beetle, if it happened in the Amazon Basin or New Guinea highlands?

Not the answer you're looking for? Browse other questions tagged evolution speciation macroevolution or ask your own question.

6
Speciation by polyploidy
1
How likely is it that Earth has millions of different species?
8
How is genetic speciation defined?
1
What is variation in Speciation
1
How do similar environments on islands in close proximity result in allopatric speciation?
3
Practical Question about Evolution, Population Genetics and Speciation
0
speciation in a single population