Can a person die instantaneously from internal damage to the brain?

Given the human heart is autonomous, can a person die instantly from internal damage to the head/brain? I would expect the heart to continue to pulse until it ran out of energy ...

My contention is whether brain-injury can cause death, albeit Memming raised a deeper question - What is the biological definition of death?

Please consider this only as a starting point (although a lengthy one), and a race against an acute onset of tl:dr ...

A person cannot die instantaneously from internal brain damage (under everyday circumstances). The reason is the non-centralized architecture of the brain and that consciousness is a global phenomenon which underlie the activity of many brain structures.

These brain structures are themselves comprised of a cellular hierarchy, with each cell being self-sufficient for at least a time regime in the order of minutes. As such the brain underlies to some extend the study of networks and robustness thereof. The brain also maintains a scale-free organization . Actual Scale free networks in nature are known to be robust.

Instantaneous in this context means a consciously discernible difference in time, which is on the order of tens of milliseconds (See: Inspection time, mental chronometry).

Also I narrow the medical cause of death down to a intracerebral haemorrhage, systemic shock or hypoxia. I definitely leave out all (rare) CNS-immunological phenomena (e.g. explosive brain death, Immune reconstitution inflammatory syndrome related,... )

But, effects that can mimmick instantaneous brain death are very plausible.

Notably, this question can be answered despite there being no rigorous consensus model of consciousness.

Consider the following just as pointers, but not as qualified, thoroughly sourced information, - contrary to a paper or review ( I will gladly include your resources, or turn this post into a community wiki if demand to do so exists):

The brain weighs only 2% of the human body mass, yet consumes 20% of the total energy at rest. Crucially the brain can deplete oxygen at a great rate, which is proportional to the brain activity in various regions, giving rise to indirect measurements of brain topology and images like these: 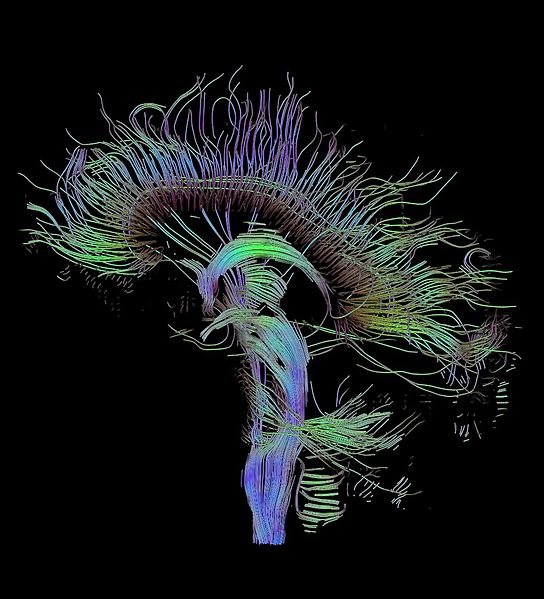 Humans have different states of consciousness which show different overall patterns of brain activity. As such the result a scientist would witness through an high-resolution fMRI/PET scanner in a stroking-individual would differ during sleep, sleep/wake transition or various levels of awareness during the days. Stroking and the effects on the brain is studied quite extensively with rats(See: rat, fMRI, stroke).

Moreover the brain activity, fine-anatomy and orchestration of brain utilization differs from individual to individual. In short the brain is what neurologists call "plastic" Neuroplasticity is the change of entire brain structures, and the brain itself from experience and physical stress/trauma (on the brain).

We are biologial enetities which have evolved to be in-sync with the planetary rotation and solar energy influx. As such brain activity changes during the day, in accordance with our circadian rythm or biorhythm, and if it weren't for artificial lightning brain activity would change over the seasons as well.

Connecting all the dots: Describing brain death in a seconds-regime comes down to which areas in an individual brain consume the most oxygen and "shut down" first, and which processes steer brain activity till organic shutdown.

The output of a memory dump and its analytic result depend on the hardware, the software and the state of the application. Unfortunately the software is spread across processors, has multiple threads and applies a genetic algorithm with dynamic recompilation.

Finally to answer more accurately, a person cannot (under everyday circumstances) shutdown brain activity within the time-interval of one reaction time-unit or 'cycle', but may transition between discernible states of global brain-activity. Such states may only be measurable with functional Imaging techniques and classifiable using computer algorithms.

15
Can a color-deficient person be made to visualize the missing colors?
0
How reversible is decerebrate posturing caused by brain stem damage?
23
Can a person really die quickly from biting their tongue?
18
Can one die from pain?
9
What's the worst that can happen from too much sleep deprivation? Can you die?
31
Can a cancerous cell from outside cause cancer in a healthy person?