When did mouth pipetting stop becoming a way to handle liquids in a lab?

Almost all modern lab protocols have an addendum prohibiting pipetting by mouth, instead mandating that a Gilson pipette, a rubber pipette ball, or a serological Pipet-Aid be used.

However, it was clear that some time in the previous century, prior to the invention of the aforementioned tools, many labs did in fact use mouth pipetting to transfer liquids, some of which were highly hazardous. An example can be seen here (from this IO9 article, which dates the photo to the year 1943): 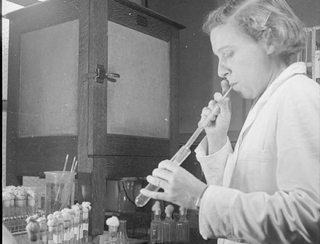 When did pipetting by mouth stop being recommended in labs?

Mouth pipetting, while almost unheard of in modern laboratories in developed countries, is still very much a current protocol in many parts of the world.

For example, this paper analyses the proportion of clinical labs in Pakistan and found evidence of poor biosafety practices (emphasis mine):

Results: A total of 1,647 (92.4%) males and 135 (7.6%) females participated in the study, with over half (59.7%) having more than five years of work experience. Results showed that 28.4% of the laboratory technicians from Punjab, 35.7% from Sindh, 32% from Balochistan and 38.4% from Khyber Pakhtoon Khawa (KPK) did not use any personal protective equipment. Almost 46% of the respondents (34.2% from Punjab, 61.9% from Sindh, 25.2% from Balochistan and 85% from KPK) said they reused syringes either occasionally or regularly. Furthermore, 30.7% of the respondents said they discard used syringes directly into municipal dustbins. The majority (66.7%) claimed there are no separate bins for sharps, so they throw these in municipal dustbins. Mouth pipetting was reported by 28.3% technicians.

Additionally, a Google Scholar search for papers published in the past 5 years involving mouth pipetting turned up 670 hits out of 284000 total hits, a proportion of 0.23%. This is further evidence that this dangerous technique has not been fully eradicated from labs.

Not the answer you're looking for? Browse other questions tagged lab-techniques history safety or ask your own question.