As a student of biology when ever I come by artificial cloning, I always find examples of females being cloned - Dolly the sheep, CopyCat, Daisy, etc. The only male I could see was Fibro mouse and a few more. What is the reason behind this? Is the male genome more difficult to be cloned? I am specifically looking for genetic reasons or other complications.

They aren't, anymore. It was a fair guess at the time, but first I think we should define what cloning in this context mean.

Our own cloning tag says:

The process in nature or in the lab by which a new organism is created that is genetically identical to its predecessor.

For animals - I'm going to use Dolly as an example since you do as well - when we say "cloning" we usually mean somatic cell nuclear transfer. This image from Wikipedia sums up the process: 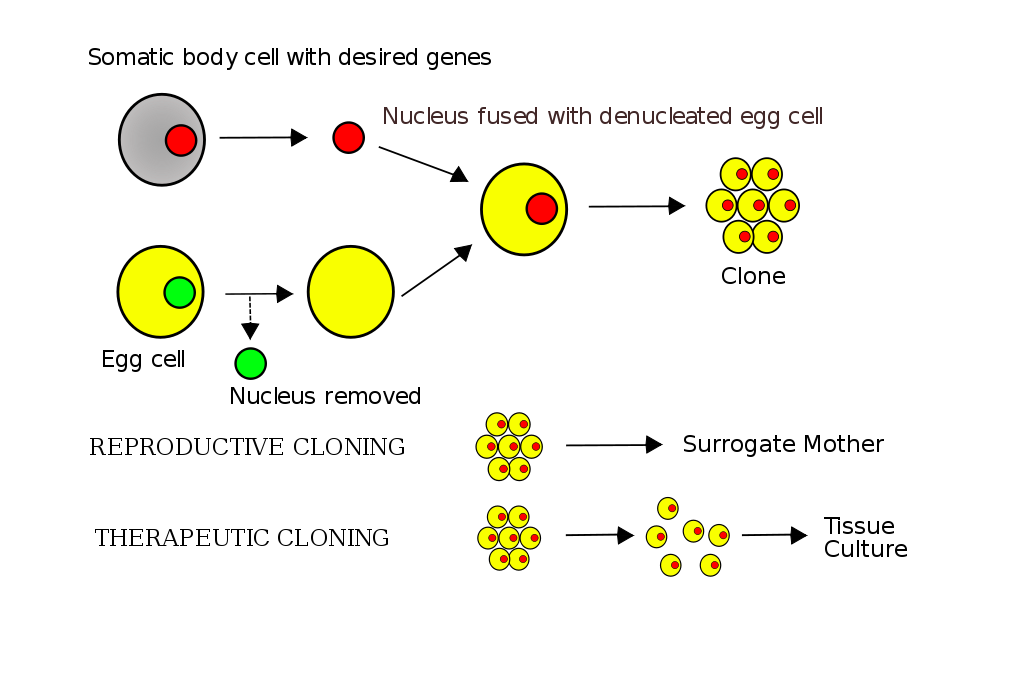 Basically, you take the nucleus of your to-be-cloned animal and put it inside the egg cell from another animal. Dolly was not produced by one animal but by two - a donor and and a surrogate. She was made using mammary tissue (another good image here) from the donor, which is important to note.

Dolly was the only one out of 277 egg cells that made it. This is a hard technique, and we still don't understand a lot of it. With even less information at the time, some prevailing ideas were:

Even when using a different technique (e.g. Cumulina), early cloning attempts hedged their bets with those same tissues. That's why Fibro, the first male cloned (from tail), was a big deal - he showed that any tissue could be used, and that reproductive or female tissue wasn't inherently special. You still need an egg and a surrogate, but if you can get the nucleus right it's just as doable.

Not the answer you're looking for? Browse other questions tagged genetics cloning or ask your own question.

-1
Somatic cell cloning always produces female offspring?
1
Is SCNT possible with only the nucleus of a somatic cell (rather than a whole somatic cell)?

0
Are progenies factually half-clones of the parents?
12
Are drones from one honey bee queen all clones?
3
Could two women have a child through artificial insemination/genetic engineering?
0
Are clones less likely to be fertile?