I'm afraid like most people I suffer from having learned "A History of Evolution" in school, rather than cutting to the chase and learning the actual "up to date" version of the subject. (Imagine if programming classes did the same thing and you were forced to learn FORTRAN and BASIC before learning JavaScript) So please help me fill in some gaps:

It is possible to introduce new genetic changes through mutations. When asexually reproducing organisms receive a mutation, they pass that mutation on to their offspring. Mutations are somewhat rare, and beneficial mutations even less so, but happen frequently enough to make a dent over a long period of time.

The problem I don't understand is with larger organisms, aren't those already rare mutations only passed onto offspring if they occur in the short-lived sperm or egg cells of one of the parents*? At the very low probability of a beneficial mutation occurring in a single cell of a male's leg, not only is it unlikely he would benefit by this mutation, but even if the male reproduced, this mutation wouldn't be passed on, and would die with the male.

Are mutations viable methods to introduce new variations in more "complex" organisms that reproduce sexually? Or is there another theory or system that bridges Natural Selection and Mutation Theory in larger organisms?

Yes, you are pretty much right. In a given population, directional selection will ultimately reduce genetic variance (Natural Selection selects for a few variants letting the other variants disappear and therefore diminishing the genetic variance) while mutations bring variance back to the population on which further selection can occur.

To go slightly further (but without developing this part too much): Genetic drift decrease genetic variance (on average). Balancing selection (such as negative frequency-dependent selection or spatially heterogeneous selection for examples) help to retain variation (but never create more variation) in comparison to what genetic drift alone would do. Different kind of spatial population structure also affect patterns of genetic variation. The important point to understand is that in an isolated population, mutation is the only process that can create new variants.

You seem to call complex organism what we usually call multicellular organisms. You are very right that some mutations might be passed on while others won't.

[..] aren't those already rare mutations only passed onto offspring if they occur in the short-lived sperm or egg cells of one of the parents

How many new mutations do humans passed on to their offsprings?

Generally speaking, the germline mutation rate per nucleotide is around $10^{-8} \text{or } 10^{-9}$ but don't consider this value too much as the per nucleotide mutation rate varies a lot between species and especially between different genomic regions. FYI, the haploid human genome (just to consider an example) consists of about 3 billion ($3\cdot 10^9$) base pairs.

The number of new mutations per offspring in humans is a Poisson distribution with mean and variance of about 100 mutations (this estimate might be quite inaccurate). This is maybe more mutations that you may have expected.

There are typically a lot of cellular divisions happening in the testes in order to produce the very important number of spermatozoids a male produces in his lifetime (See figure at the bottom of this answer and see spermatogonium). Mutations also occur during those divisions and therefore we observe a correlation between the age of the father and the number of new mutations transmitted to the offspring. Hong et al. (2012) suggest using the following formula. The number of new mutations transmitted to the offspring by the father in humans is equal to $25 + 2(g-20)$, where $g$ is the age of the father. Of course, this is just a formula that matches quite well the observations but has no theoretical meaning. This formula applies only to males that are older than 20 years old.

Empirical observations show that the higher is the number of base pairs $n$, the lower is the per-base-pair mutation rate $\mu$. This correlation between $n$ and $\mu$ is roughly linear with a slope of about 1. In other words, the genome-wide mutation rate $U = \mu \cdot n$ is more or less constant in all species. This correlation is referred to as Drake's rule and again, it is a rough approximation of a more complex reality.

If the genome-wide mutation rate for neutral mutations is $U_n$ and the population size is $N$, then there is a Poisson distribution of the number of new mutations at each generation with mean and variance $2 \cdot U_n \cdot N$ (assuming a diplontic life-cycle). Because each one of these mutations has a probability $\frac{1}{2N}$ to get fixed, the rate of neutral substitution in this population is $\frac{1}{2N}\cdot 2 U_n N = U_n$. Therefore, the rate of neutral substitution is a function of the genome-wide neutral mutation rate only. This classic result is used in estimating time since the last divergence between sister lineages (molecular clock)

Did you say Mutation Theory? 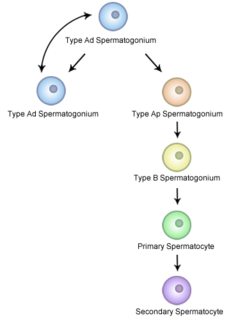 You're right that the mutation must be in a germ cell in order to be passed on. Most errors are introduced during DNA replication (at a rate of around 10-10), which occurs a number of times between the zygote stage and mature gametes. This book estimates that there are 24 divisions between zygote and egg and 23n+34 divisions between zygote and sperm, where n is the number of years past age 14. Given the haploid human genome is ~3.2∙109 base pairs, you would expect ~10 new mutations in an egg and ~90 in the sperm of a 25 year old male. This is a very rough calculation, but predicts about 100 mutations per generation.

This paper, based on actual empirical evidence, finds 175 mutations per generation.

The point is, mutations do occur appreciably in germ cells and are passed on to offspring. Also, keep in mind that mutations aren't the only source of variation upon which selection acts. Variation is also created by homologous recombination and random mating.

Not the answer you're looking for? Browse other questions tagged evolution natural-selection mutations sexual-reproduction or ask your own question.

2
What is a typical value of the selection coefficient s?
0
Determination of genes to be modified in epigenetics